It's been a busy two weeks: apart from other things, we went to Suffolk for a few days holiday with friends.  As usual, I was on the lookout for knitting-related things, but the only thing I spotted was a Victorian purse.  It was in the little museum in Framlingham Castle, a nice collection about life in the surrounding town. 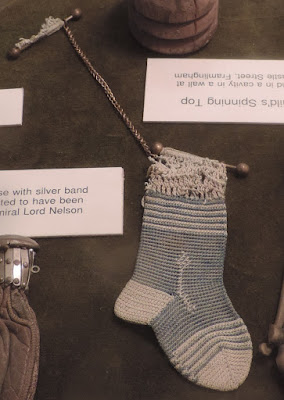 In a case of 19th century bits and pieces was a little purse made from a tiny sock.  I thought at first it was knitted, but on looking closer, I don't think so - I think it's crocheted.  And I'm not sure how it's meant to be used.  Although it was displayed with the chain stretched out, in fact the bar at top left has bits of frayed thread attached, so presumably originally the two bars were parallel at the top edge of the sock - I don't know whether there was any way to fasten the two bars together, though, and whether the chain was just used as a hanging loop.

It's very neatly made, and I like the fancy clock especially. 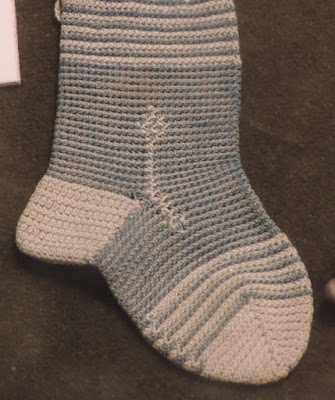 It reminds me of the little socks I have seen made as Christmas decorations.  It doesn't look as though it would be very practical as a purse - I imagine that Victorian pennies would get into the toe and be hard to extract.  But on the other hand, it's evidently been used a lot, for the top to fray so much.  Maybe you would just hold on to the toe and tip the coins out into your hand?  A pretty little thing, anyway.  If anyone has seen anything like it, I'd love to know.
Posted by Barbara at 10:33