Some of the pattern leaflets in the Knitting & Crochet Guild collection have come directly from yarn shops - for instance the batch of Hayfield leaflets we were given at the beginning of this year. But most of the leaflets in the collection are secondhand - originally bought by a knitter for their own use. Probably some leaflets were bought but never actually used (I've got some of those myself), but most of these secondhand patterns have been working documents.

Sometimes we see evidence of a leaflet's earlier existence.  Many people count rows by writing on the pattern - so we see lots of 'five-barred gates' and other notes.  Others take better care of their patterns, and write on a separate piece of paper - which has sometimes been donated along with its pattern. 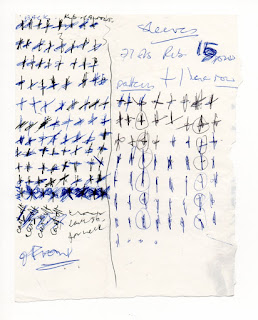 Often these annotations are completely incomprehensible - though hopefully they weren't to the person who made them.

A couple of weeks ago we found two leaflets with intriguing  notes.  One was a Copley's pattern from the 1930s, with faint pencil writing on the front, almost illegible - it was some notes on making omelettes.  The other was a Lister/Lee Target leaflet, which has a message written very firmly on the front:  "I SHALL ON NO ACCOUNT BE CAJOLED INTO KNITTING THIS EVER AGAIN. R.C. 6/8/80"

It looks a perfectly innocuous pattern, so I can't imagine what caused so much antagonism towards it.  I guess that R.C. had knitted it for someone else (who did the 'cajoling') and had perhaps been cajoled into knitting it more than once.  But why not just say 'No' rather than writing on the pattern?  Perhaps the cajoler was not the sort of person to take 'No' for an answer and needed a stronger message?   I don't suppose I shall ever know.
Posted by Barbara at 23:52