I wrote earlier about knitting a pence jug from the directions in Mrs Hope's The Knitter's Friend.  I'm not at all familiar with 19th century knitting books, so I've been trying to get a feel for how easy they would be to use.

The instructions for the pence jug were on the whole clear, and of course having an illustration helped.  But I have been looking at some of the other 'receipts' in the book, most of which aren't illustrated, and some of them are very hard to understand.

For instance, there is a pattern for a comforter which completely baffled me.  In the First World War, a comforter seems to have been more or less equivalent to a scarf or muffler, but this was evidently something different.   The complete instructions read:

Elsewhere in the book are directions for double knitting:

* In slipping this stitch, take it off with the pin pointing towards you, that is, as though you intended to purl it.

This sounds  a bit like what we now call double knitting, i.e. creating a double layer of knitting, except for 'putting the wool twice over the pin'.  But if they were not both called 'double knitting' I would not guess them to be the same, from Mrs Hope's instructions.

John bought me another little knitting book at the York Antiquarian Book Fair, The Ladies' Knitting and Netting Book (3rd series) by Miss Watts.  It seems to have been published about the same time as The Knitter's Friend (1840s).  It has instructions for a very similar comforter (a tube of K3, P3 rib, and then a flat piece of double knitting on half the stitches), and describes how it is to be worn:  "The ribbed part is to set round the throat and the double knitting covers the chest."  So that's clear - it's what's now called a dickey.


Bring the wool forward, slip 1 stitch, pass the wool back, knit 1 stitch with the wool twice round the needle;  repeat to the end of the row.  Every row is the same.

She is (they are) evidently describing the same technique as Mrs Hope, but  I wouldn't want to rely on either set of instructions and be confident of doing what they intended.

Then I found another book, The Comprehensive Knitting Book by Esther Copley (1849).  She gives instructions for stitch patterns, as well as patterns for a huge range of garments. This is what she says about double knitting:


Double Knitting
So called on account of its forming a double texture, as if lined with a separate article and confined at the edges. The texture throughout though thick is loose, and is adapted to purposes in which warmth and softness are required rather than elegance of appearance, such as blankets, petticoats, drawers, protectors for the chest, &c.  Cast on any even number of stitches. Begin with six or eight plain rows by way of border.  The number of edge stitches should correspond with those of the border.  Thus, if eight rows of border be knitted, four stitches should be knitted plain at the beginning and end of every row. Having knit the edge stitches, bring the wool in front and slip a stitch; carry the wool back, and knit the next stitch.... putting the wool twice round the pin, once more than it would be in common knitting.

These two stitches constitute the whole of the pattern; they are to be repeated till the last four of the row, which are to be knitted as edge-stitches.  In returning, all the long stitches will be slipped, and all the short ones (slipped in the foregoing row) will be knitted.  Every row is alike until the last before the finishing border.  In this, the wool is to be brought in front, the stitch slipped, and the wool returned as heretofore; but the second (and every other alternate stitch) is to be plain knitted, not putting the wool twice round the pin.

There's a woman who knows what she's talking about.  That description has everything you need:  it tells you what the result is like, what to use it for, and gives very clear directions.  She tells you that you need an even number of stitches (whereas in Mrs Hope's comforter receipt, the double knitting section is worked on an odd number of stitches - which could cause horrible problems to anyone trying to follow it without already knowing about double knitting).  She talks about the edge stitches, which Miss Watts does not, and Mrs Hope only mentions edge stitches at the beginning of the row. She tells you what happens on the second row, i.e. you knit the stitches you slipped on the previous row, and v.v., which is useful confirmation in understanding the directions.  And she tells you how to finish.

So I was easily able to follow Mrs Copley's instructions and knit a swatch. 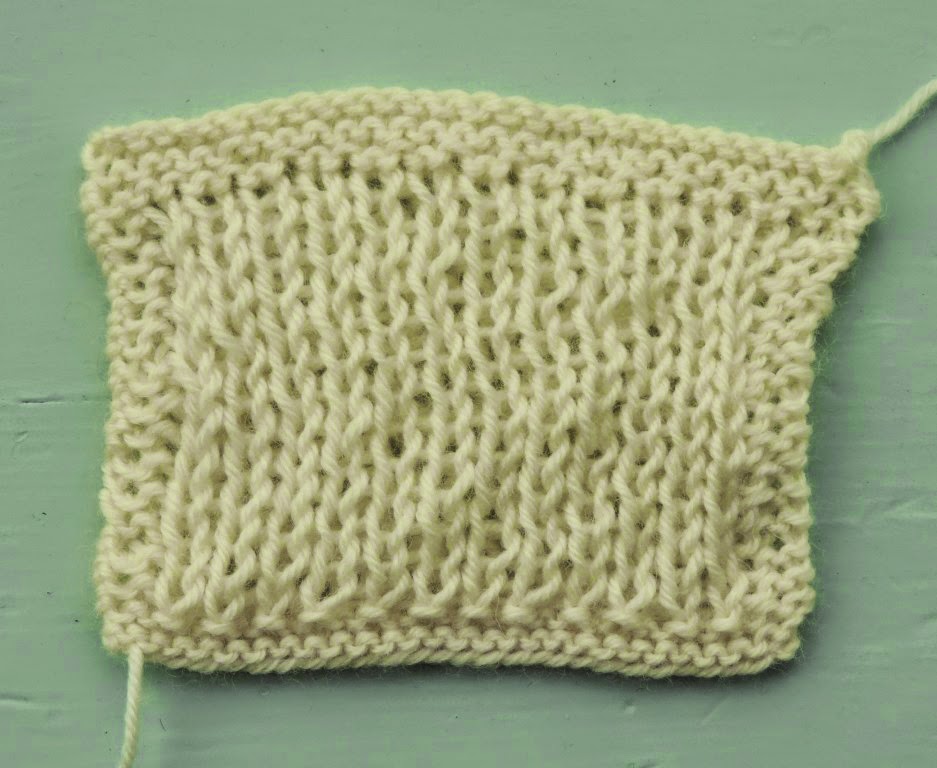 Within a border of plain knitting (garter stitch), you get a double thickness of stocking stitch, with the knit side outwards on both sides - so the other side of the swatch looks the same.  As Mrs Copley says, the texture is very loose, because putting the yarn round the needle twice gives a larger stitch than usual.  And I found it very difficult to get the stitches even, so it does not have much 'elegance of appearance'.   It would make a warm soft chest covering for your comforter.

Mrs Copley is my hero.  I haven't read the whole book - it has 208 pages - but what I have read looks very thorough and comprehensive, as she claims.  And the book is available free from Google Books.
Posted by Barbara at 18:52