Last weekend, I went to the Cloth & Memory exhibition at Salts Mill - I had been there already in August, but only for a brief visit,  and wanted to have a proper look before it closed on November 3rd.   It was in an immense space at the top of the building, originally the Spinning Room.  It is 168 m. long and 18 m. wide - when I went in August, the staff were wearing bright green t-shirts and one of them told me that they had to wear bright colours, because otherwise they couldn't see each other from one end of the gallery to the other.

The room seems to have been left as it was, apart from the removal of the machinery, with the paint peeling and flaking off - the room is in many ways part of the exhibition.  There are no windows in the side walls, just ventilation openings, but it is lit by the skylights all the way along.  So the weather outside also plays a part - I was told that on a sunny day, the exhibits look very different.  But both days I was there were very dull (in fact, it was raining last Saturday). 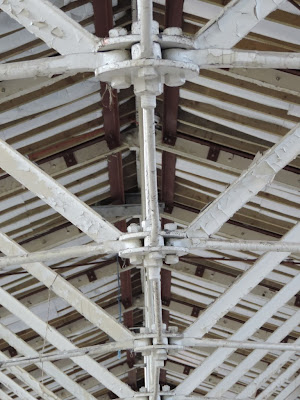 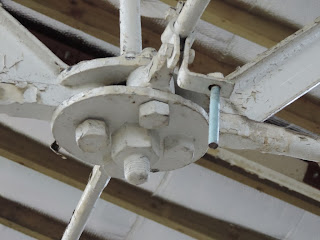 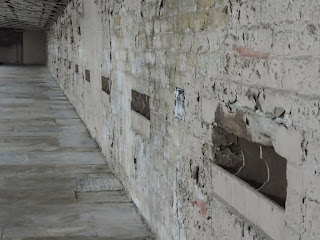 Built into the walls are a series of bins for storing the spools for yarn (I think).  A couple of the artists had used the bins for their pieces.  Caren Garfen based her piece on the women recorded in Saltaire in  the 1891 census.  Many of the single women were working in the mill, while the married women were just listed as 'Wife'.

There were several large installations by Japanese artists that I particularly liked.  The one by Koji Takaki looks as though the cubes are gently floating out of the the rest of the piece.


But the most stunning piece was by Yoriko Yoneyama.  A fine web of cotton threads, each with an individual grain of rice stuck to it every few inches (by the natural stickiness of cooked rice before it dries out). 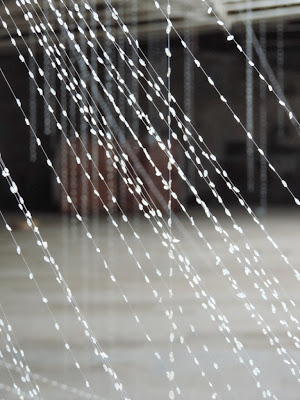 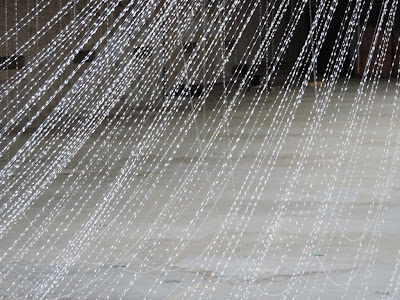 It's beautiful, and astonishing to think of the effort required to construct it.

Altogether the exhibition was well worth seeing. And if you didn't see it, now you have an idea of what you missed. 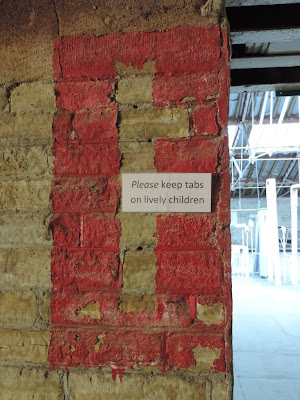