I have had to edit my previous post on my Aran bobble hat.  I discovered that I had confused two different Patons Aran pattern books from the 1960s, The Aran Book and The Aran Look.  When I wrote the post I inexplicably included the front cover of  The Aran Look, when the bobble hat is actually from The Aran Book.  Got that?  So now I have switched them round.  Here is the cover of The Aran Look, which some readers will already have seen in the original version of the earlier post: 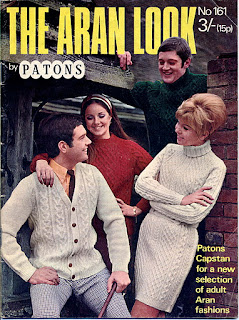 And just to prove that The Aran Book was indeed very popular (and that I can now tell the difference between them), here is a later cover,  which says that the original edition sold over a million copies.  It's that first edition that turns up over and over again - I sometimes feel that I must have seen a significant proportion of the million copies. 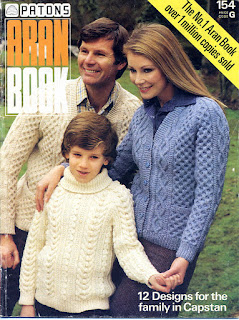 The Aran Look is itself  notable for an amazing Aran outfit of "sweater, helmet, knickerbockers and oversocks". The sweater is a nice design and perfectly wearable. But Aran knickerbockers?  No.  One of those extraordinary designs where you wonder if anyone ever made it and wore it, apart from the sample knitter and model (who of course were paid to). 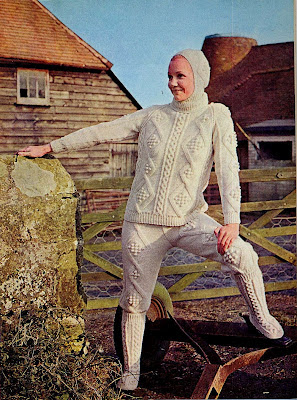