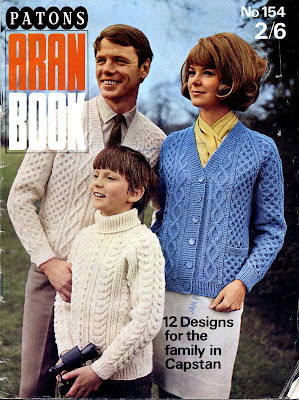 In all the mass of material that we have been sorting in the Knitting and Crochet Guild's collections, some items turn up over and over again. The one that I have seen most often, probably, is a Patons pattern book, The Aran Book, published about 1968.  I have seen so many copies of it that I almost believe that every knitter in the country must have had one.

Why did it sell so well?  Most of the patterns are fairly standard Aran jumpers and cardigans.  But when knitting Aran jumpers first became popular, you were supposed to use oiled wool (in the natural white/cream, of course) - the first Aran jumper I knitted was in oiled wool.  And most of the early Aran pattern leaflets were illustrated in black and white - why would you need colour?  So I think this would have been a very attractive booklet. You don't need special oiled wool, you can use Patons Capstan, a regular wool yarn in Aran weight.  And you can knit in red, blue, green - any colour you want.  (I was knitting at the time, and knitting Aran jumpers too, so I ought to know why it appealed to knitters so much, but I don't.)

I know that we had a copy of The Aran Book in my family, because I have a bobble hat that my sister knitted from it (although I don't remember the booklet itself).  I have been wearing the hat at Lee Mills recently when I have been working downstairs in the magazine collection, where it is very cold.

It is definitely the same hat because the Aran motifs match, although it was never as roomy as the one shown in the booklet. 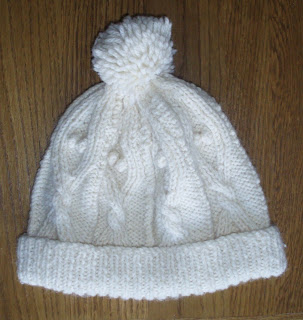 I think it would look better without the bobble on top, but for historical accuracy I shall leave it on.

PS  My sister says that actually the hat was knitted for her by our mother.  She thinks that Mother might have been using up some yarn and that was why she made it a bit smaller than shown - although I'm not sure how.  Maybe it was finer yarn or smaller needles.   She also thinks that there might have been matching mittens as well, but we don't know what happened to them.
Posted by Barbara at 15:21