The One That Got Away

I wrote in a previous post about the early 20th century knitting and crochet magazines I had found following the burst pipe at the Knitting and Crochet Guild store, that I brought home. Most of them did dry out successfully, but the pages of one were stuck together across the bottom, and I could not find any way to separate them.  The paper is slightly glossy, and I think there is a coating that became sticky when it got wet.  In fact, when I was drying out magazines and patterns in the bathroom, there was a distinct smell of wallpaper paste in the air, so it's not surprising that some things got stuck together. 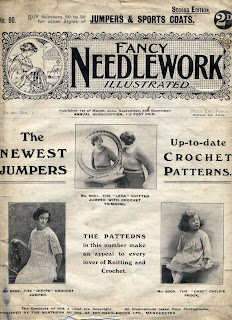 It is an issue of Fancy Needlework Illustrated that dates from the early 1920s.  There are patterns for several jumpers in it and one or two are really very pretty - they could be worn now without very much alteration, given the fashion for vintage clothes.  Fortunately the illustrations are all in the centre of a page, where the paper is not stuck, and enough of each pattern is readable to be able to understand how it works.  I will describe them in the next post, so that some of the information survives even though the magazine itself is not intact.

The magazine front cover says that it is published by the Northern School of Needlework Ltd., Manchester.  But all the patterns use Ardern's Star Sylko and it seems that it was published in association, somehow, with Ardern's (just as Patons and Baldwins  published Stitchcraft).  I have seen a 1930s advert for Star Sylko that also advertises Fancy Needlework Illustrated, so there was evidently a close relationship.   Ardern's was a cotton spinning mill near Manchester that produced several types of cotton yarn, especially for crochet. Star Sylko was a mercerised yarn, produced in several thicknesses. The coarsest, size 3, is used  in most of the knitting patterns. 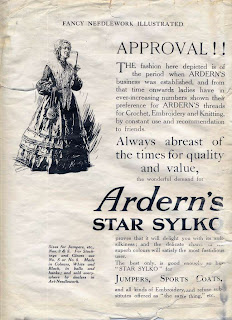 The patterns in this and other issues of the magazine are a bit casual about specifying tension (or sizing, for that matter) but occasionally they do, and it seems that the size 3 thread gave 7 stitches to the inch on size 10 needles, or 6 stitches to the inch on size 9.  Are these the same as the current standard British size 9 and 10  (3.75 to 3.25 mm.), I wonder?  Anyway, I guess that size 3 is approximately equivalent to 4-ply (sport or fingering). That's not outrageously fine; I vaguely  imagined that women back then knitted in very fine yarn, but probably they were in just as much of a hurry to get their jumpers finished as I am.
Posted by Barbara at 16:53