2011 already!  Best wishes for a good year to everyone.

I spent several hours yesterday at the Knitting and Crochet Guild's warehouse near Holmfirth - there was a burst pipe a few days ago in the unit above, and so there was water pouring into one end of the warehouse for quite a while until the leak was discovered.  Fortunately, only a small proportion of the collections were affected.  Also, it was clean water and the cardboard boxes that things were stored in protected some of the items to some extent.  But there has been a lot of rescue work to do - a team were working there on Thursday before we got back from Berkshire, and evidently did a huge amount of work.  Yesterday, we were sending a van-load of things off to a freezing facility to stabilise them and prevent mould developing. 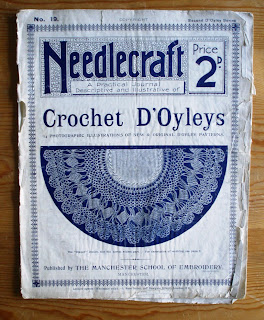 After the van had gone, I emptied some slightly damp boxes of assorted periodicals, to bring them home and see what could be retrieved.   At the bottom of one box, I found some magazines dating from around the First World War, which were very wet.  They seemed important enough to try to dry them out.  We have had them all over our bathroom floor, interleaved with newspaper, which is not the ideal material, but it was the only thing we had available that would absorb moisture.   It seems to have worked very well, and they have almost dried out.  They were not in very good condition to start with, in fact, but I don't think they are significantly worse now (although of course, I didn't see them before they got soaked).

I hope that someone will be interested in the instructions for  Crochet D'Oyleys, because frankly I am not, although the idea of a d'oyley (or doily) is fascinating in a "What on earth?!!"  kind of way. There is even a pattern for a cheese d'oyley, i.e. a doily for your cheese plate, which is wedge shaped.  Why would you cover something that is easy to wash (a cheese plate) with something that is harder to wash and needs ironing, and probably starching, too?  I guess because there was a servant to do the washing, while the lady of the house sat crocheting doilies.   And the Victorians and Edwardians had a mania for covering, trimming and decorating anything that didn't get out of the way fast enough.

Etymological note:  according to Wikipedia and my ancient Shorter Oxford English Dictionary, the original  spelling is doily. Its use to mean "a small ornamental napkin used at dessert" dates from 1711 (OED).   I guess that the spelling D'Oyley seemed posher. 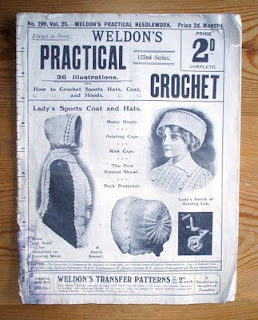 Some of the magazines do contain patterns for more practical things,  e.g. (as you would expect) Weldon's Practical Crochet. The cover shows a lady wearing a "Sports or Aviating Cap"  and a "Hood and Scarf for Motorists or Evening Wear".  The other bonnet shown on the cover is "A practical and becoming bonnet for motorists, or for wear in the country, for travelling, evening wear, etc. "     Of course, they were all designed for huge Edwardian hair styles.  (I think this magazine is pre-WWI). 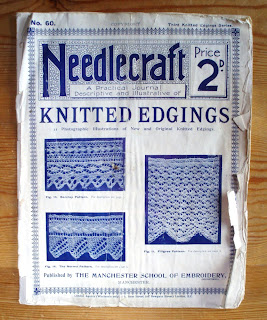 There are also one or two magazines on knitting, though on the very limited evidence of this selection of magazines, crochet seems to have been more popular at the time.
Posted by Barbara at 12:02