I have been musing on what to knit with the 6 balls of  bronze-y coloured Rowan silk-wool yarn I bought  recently.  I have borrowed a copy of Barbara Walker's Knitting from the Top, so that will give me the structure of a raglan-sleeved cardigan that I can knit downwards until the yarn runs out, but I still need to choose a stitch pattern.

Because of the slightly metallic sheen, I've been thinking of fish-scales and the sort of armour made of small plates.  So on a bus journey yesterday, I tried some possible stitch pattern that might look vaguely like that. 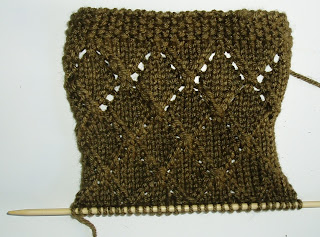 (For anyone who thinks, like my husband, that the photo is upside-down, it's not. I'm going to knit top down, so I want to see how the stitch pattern will look that way up.)

I started (after the moss stitch band) with the Openwork Diamonds pattern from Walker's A Treasury of Knitting Patterns.  But a lacy stitch doesn't seem appropriate if you are thinking of fish scales or scale armour.  So for the rest of the swatch, I filled in the holes in the lace pattern (on the row after a yarn over, I purled into the back of it, to twist it rather than leaving a hole).   I think either of these stitch patterns would work well with the raglan increases for the sleeves and would look neat.

But now that I have tried knitting with this yarn, it seems quite thick for double knitting, and it's producing a denser fabric than I expected (on 4mm needles).  So I'm not sure it's going to be suitable for a light evening cardi.   Maybe a more open stitch would be better, maybe some sort of mesh.  That would be kind of chain mail, rather than scale armour or fish scales.

And since I'm going to unravel my swatch, maybe I could measure the yarn I've used and estimate the required area of a small cardigan and see if I'm going to have enough.  The plan is to stop when the yarn runs out, but I don't want it to look stupidly short.  More investigation needed.
Posted by Barbara at 11:01