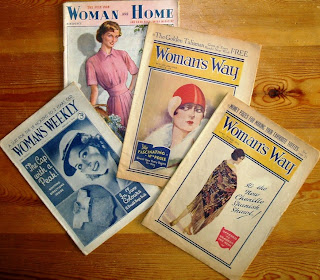 This week my sister came to visit, bringing with her a few copies of old women's magazines from the 20s and 40s to add to my collection.  I have not heard of Woman's Way before, to my knowledge (although M says that it was me that bought them in the first place and gave them to her, so what do I know?).  These copies are from 1928 and 1929, and the magazine was evidently offering the kind of inducements to buy that are common now - special offers and free gifts.  Some of the offers are highly misleading - one cover says "It's the new Chenille Spanish Shawl!  Offered to readers this week", though it turns out to be the first prize in a competition, which is not much of an offer. The other copy advertises "The Golden Talisman - Given to Every Reader Next Week", which is a "lucky magic charm you should have with you always, to bring you good luck every day", and promises a future free gift of  "The Mystic Wheel of Destiny Book".  It's quite cheering that the magazine hasn't survived, in spite of these ploys, whereas Woman's Weekly and Woman and Home are still published. 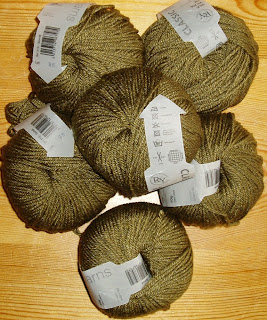 While M was here, we went to Holmfirth (in the pouring rain) and had a very nice lunch at Nick's Kitchen.   We visited the Up Country shop, which sells Rowan yarns, as well as Lousia Harding, Noro, Debbie Bliss, ...  It was just a reconnaissance visit, to show M what they sell, but there was a trunk of oddments at £2.50 a ball, and we found 6 balls of Rowan Silk Wool DK there. It's a beautiful soft yarn, 50% merino and 50% silk, and the silk gives it a lovely sheen. The colour is a sort of yellowy-greeny brown, called Sorrel, but the silky sheen makes it look almost metallic, like bronze.  M persuaded me to buy it. I'm not sure what I'll make with 6 balls of DK - maybe a  sort of shrug.  I'll knit it top-down, probably, so that I can stop when the yarn runs out.  But that's not a project for today.

So in spite of my intention not to buy any yarn, I have acquired 6 balls of it.  On the other hand, M has taken off my hands the 4 balls of Rowan Wool Cotton in Verdigris that were left over from my textured jacket, to knit a scarf,  so that almost balances.
Posted by Barbara at 17:39