On Monday, I went to Sheffield - I had some errands to do in the John Lewis store.  We usually go by car, and  it takes about an hour.  There is a railway line from Huddersfield to Sheffield, and a train about once an hour, so as I was going by myself, I decided to go by train.  You would not go from Huddersfield to Sheffield by train if you were in a hurry - it takes an hour and a quarter, although it's only about 30 miles.   But the train journey allowed me to get lots of knitting done. (I can't write about the knitting yet, because it's for a Christmas present).  It was a brilliantly sunny day, and the line goes through very pretty countryside of woods and fields (and over two viaducts that give you spectacular views).  It's not a bad way to spend an hour or so, as the train trundles slowly along.

Sheffield is my home town, and so I feel that I know it very well, but I haven't been through the station for a long time.  The area in front of it used to be dingy and unattractive, so I was astonished to see a magnificent water feature there. 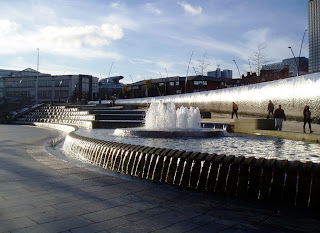 It's a clever design - behind the long silvery wall of water on the right is a busy road, which you are hardly aware of as you walk up to the city centre.

I spent some time browsing in the yarn department in John Lewis, which has an extensive range of Rowan and other yarns.  Lots of very enticing things.  But I am practising going into yarn shops and not buying any yarn.  (Unless I really need some, or it's a terrific bargain, of course.)   I ought to start practising not buying patterns as well, to be honest - I bought the book of Rowan Studio Knits by Sarah Hatton, which has several really nice, wearable, attractive designs. But do I need more patterns?  No. I already have quite enough plans for things that I want to knit to keep me busy for a long, long time.... 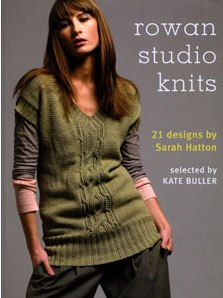