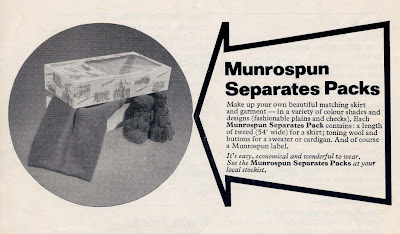 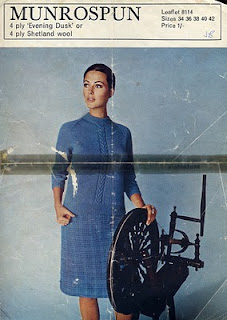 
In those days, it was very smart to match all the separate parts of your outfit - an exact match of plain colours, or a plain colour matching one of the colours in a check or tartan fabric, and the Munrospun packs were designed to make it easy.  Now that rule has been relaxed, and I think people are better (or braver) at putting together colours that don't match.  (Though I do tend to work on the principle that black goes with everything, which isn't very sophisticated.)  In fact, too much matching looks wrong now - I saw an elderly woman earlier this year wearing jacket, skirt, blouse, hat, gloves, handbag and shoes all in matching or toning shades of olive green.  She clearly felt very smart, but it looked a bit odd, if not obsessive.  Much too matchy matchy.
Posted by Barbara at 18:21