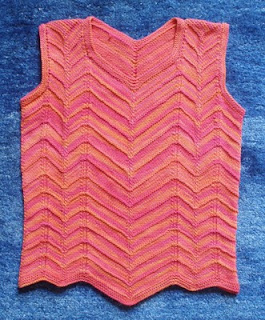 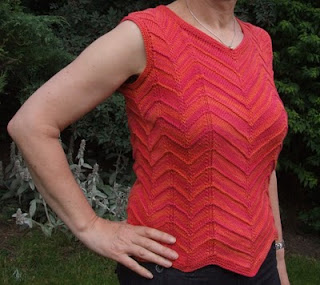 It has been an interesting pattern to knit and would be worth doing again.  I am somewhat reconciled to knitting on a circular needle - it did help a lot with fitting and getting the length right.  (I think that the main reason that I had problems with knitting the Oatmeal Pullover  was the thickness of the needles compared with the joining cables, as I mentioned at the time.)   There are some patterns in the Classic Knitwear book that use the same chevron idea but with added sleeves, e.g. a zip-front jacket (though I would have to convert it to a button fastening - I don't approve of zips in knitwear.)   One of those would be nice for the winter.
Posted by Barbara at 17:06