When I finished the Badminton jumper, I had three other projects already in progress.  One is the Marion Foale cardigan in 3-ply  - I am working on it regularly, but it isn't going to be finished any time soon.  The other two are a bit problematic for various reasons and temporarily shelved.  So I have started a new project.  It is a pattern I saw some time ago in Marianne Isager's Classic Knitting. 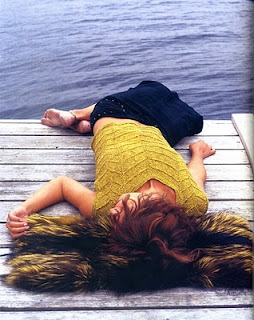 When I first saw it, it immediately appealed to me because it is such a clever design - as well as looking good, of course. I love the way that the structure of the top just arises naturally from the chevrons. Evidently other people have thought the same way -  of the 25 patterns in the book, this one has been by far the most popular, judging by the number of projects reported  in Ravelry.


It's a summery pattern, and the yarn I am using is pure cotton from Araucania in very bright summery colours - pink and orange.  I bought in last December in York, at the yarn shop in the Shambles (the last time I was in York, it seemed to have closed down, but I am told that it has re-opened under the name Ramshambles). It was a cold and dreary day, and I bought the yarn in the hope that one day there would be bright sunshine on a day warm enough to wear a sleeveless top outside.  I wasn't actually intending to buy anything at all, but J left me there too long while he was in  the secondhand bookshop near the Minster.

I don't usually wear such bright colours, especially not orange.  In fact I don't think I have ever worn orange. (Except that I vaguely think that I once had an orange cagoule?  You'd think that I would remember.)

Marianne Isager has a clever approach to gauge swatches too - she gives you instructions for a piece of knitting that includes all the stitches you need for the garment, and there is a photo of it in the book of the exact size you should aim for.  You lay your swatch over the photo and it should match. 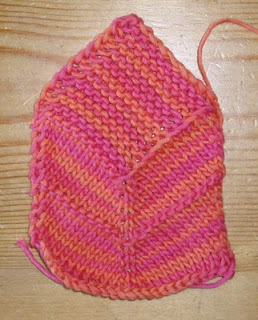 You can also use the gauge swatch to start knitting the Zigzag top.  The garter stitch square sits on the top of the shoulder and you knit the front and back starting from that square. But I wanted to start again  - I thought that picking up stitches along the side of the square could be neater.  I didn't like the fact that the selvages are different along the two sides of the shoulder straps, either, so I consulted the excellent Handknitter's Handbook (Montse Stanley) and made them to match. 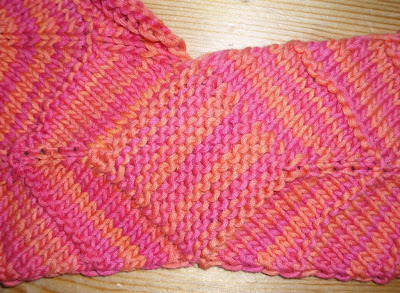 You knit two front straps, then join them by casting on extra stitches to form the front and back V-neck, and then eventually the front and back are joined at the armholes and the rest of the top is knitted downwards in the round.  The neckline is a bit floppy at the moment, but the last step is to pick up stitches around the neck and armholes and knit a few rounds on smaller needles, which should correct that.  Hopefully, the good weather we are enjoying just now will not be the last of the summer - I want to do some lying around by a lake,  in my Zigzag top, like the photo.