The Sixties before Miniskirts

On the drive from Ashland to Portland up the I5, we stopped at a little town called Cottage Grove for lunch - we knew from a previous stop that there is a historic district around the Main Street, with a nice cafe attached to a second-hand bookstore (thus combining two of our favourite occupations). 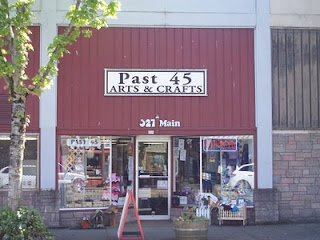 This time, further along Main Street, we found a craft shop called Past 45  (next to the machine-gun store, oddly).  It is an outlet for a wide range of craft goods made by Cottage Grove seniors (knitted dishcloths and baby clothes,  crocheted items, some very well-made wooden furniture, and much more).  But the reason we were there is that evidently some seniors were selling off their old knitting and crochet magazines and pattern books, for 10 cents each.  10 cents!!  I could have bought a selection of Vogue Knitting magazines from the 80s and 90s for a dollar - except that I already have some, as I described in a previous post.


So instead, I bought a few older issues of Vogue Knitting from the early 60s.  They don't contain any patterns that I would want to knit, but I'm interested in how knitting has developed and changed - and on this evidence,  the early 60s were not a good time to be a knitter.  I think it's probably that high fashion at that time (as represented by Vogue)  was unsympathetic to knitting - I'm sure that ordinary knitters like my mother carried on making the kind of clothes (jumpers, cardigans, pullovers, ...) that they always had.   Although there are some casual sweaters, the majority of patterns for women in these issues are for dresses, coats, jackets, skirt suits, and similar smart ensembles.  The knitting is unambitious and to me looks uninteresting - the skirts are invariably straight or very slightly flared and there is a lot of plain stocking stitch or other simple patterns.  Any interesting detail, like the contrast trim on the dress in the photo, is often applied after the knitting is finished.  The simplest skirts are just a cylindrical tube, with some narrowing at the top and an elasticated waist - boring to make and boring to wear.  All these dresses and skirts are completely impractical too - they would  stretch out of shape the instant you sat down in them.  From looking at the photos, I can't help thinking that the ideal was to make something that didn't actually look knitted.


And then....  miniskirts, tights, skinny rib sweaters and all the rest of what we think of as Sixties fashion came along.  Everything changed - mostly for the better.  At least we were saved from having to look elegant.
Posted by Barbara at 13:33