This has nothing whatever to do with knitting.....

On Saturday John and I had a shopping trip to Sheffield, my home town.  We had lunch in a cafe on Division Street, across from the old fire station, where thousands of years ago I had several training sessions for my Girl Guide Emergency Helper badge.   It was a beautiful day, and the sun was picking out the arms of the city of Sheffield high on the facade of the fire station.  I had never noticed them before - back when I was a Guide, the stone was probably black with grime. 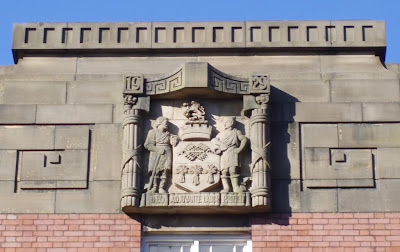 Sheffield is known for steel making, and especially for its cutlery, which has been famous for centuries  - one of the characters in Chaucer's Canterbury Tales had a Sheffield knife.  Sheffield people are very proud of its steel and cutlery industries, and when I was a child, the city arms were seen everywhere - not least on every bus and tram.  We all knew that the sheaf of arrows and the three sheaves of corn on the shield are a reminder of the River Sheaf, that runs though Sheffield.  (The river itself is not in fact an important feature in the centre of Sheffield  - it's a very small river and much of it runs underground  these days.)  And the supporters are Thor and Vulcan, the gods of metal working.

Thor and Vulcan are often shown in the Sheffield arms resting an elbow on the top of the shield, though they aren't usually quite as casual as here. They look to me like a pair of old men in the pub, standing at the bar -   they've just taken a break from smiting things, and are discussing the finer points of iron working and how no-one appreciates proper craftsmanship these days. It made me proud to be from Sheffield.
Posted by Barbara at 14:59