I haven't written for a while - that's because we've been on holiday.  We went to two of the Greek islands in the Cyclades, Sifnos and Milos, with Naturally Greece, and afterwards John and I stayed on in Athens for a few days. We've had a wonderful time - good weather, beautiful scenery, amazing archaeology, excellent food, good company.   John has come back with thousands of photos to sort out - I would have contributed a lot more myself, but the camera I was using wouldn't recharge, so I only took a meagre 200.  Here is a very small selection of the total.

Sifnos is an island for walkers - still very rural, with few roads, and many muletracks and footpaths.  The hillsides are terraced and scattered with white-painted buildings.  There are 235 (or is it 237?) churches on Sifnos, all well-maintained - even though in many cases there is no road access. 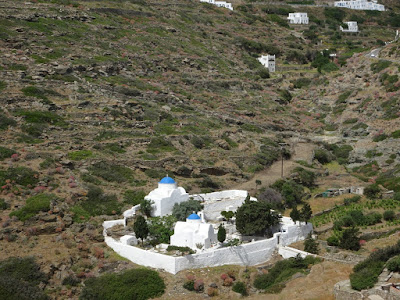 And here's the transport: 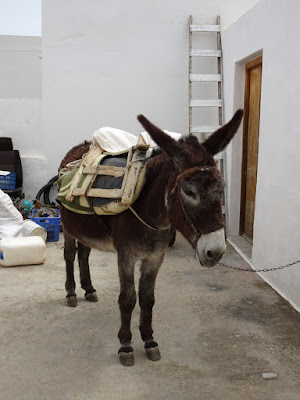 There are dry-stone walls everywhere, which reminds anyone from Yorkshire of home (though the rock is completely different and I imagine the wall-building techniques aren't the same).  Here's one in front of  a very common type of Sifnos building - a dovecot. 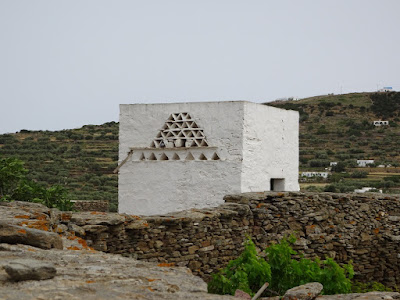 I liked the dovecots a lot.  They are usually well-maintained and often still occupied by pigeons, though I doubt if the pigeons are used for food these days. 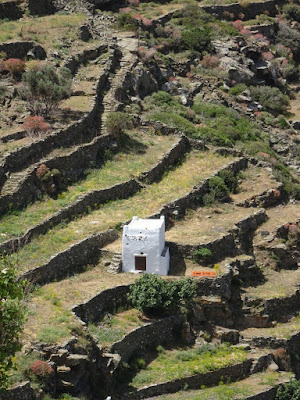 The dovecots usually have a little turret at each corner of the roof - they are very distinctive.

And everywhere there are olive trees. 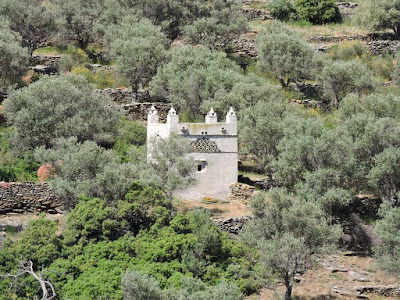 The houses on Sifnos have very characteristic ceramic chimneys, sometimes fancy ones specially made for the purpose, but often looking like an ordinary storage pot, re-used. 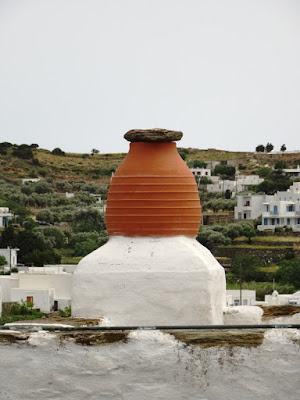 Then we went to Milos (an exciting journey by small boat, as the ferries were on strike that day). Geologically it's very different - the rocks are volcanic. These are the cliffs at Sarakiniko, where the soft rock is eroded into fantastic shapes. 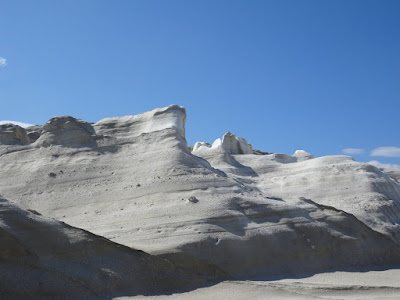 And at Mandrakis, boathouses have been cut into the rock to shelter the fishing boats in bad weather. 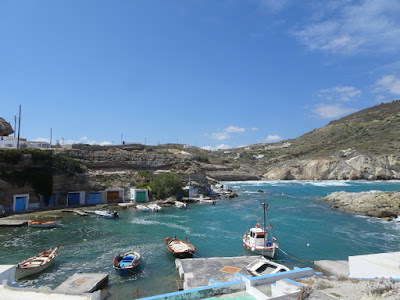 There are many windmills, or windmill stumps, on both Sifnos and Milos.  This hill, at Trypiti on Milos, must have been particularly windy as it has seven: 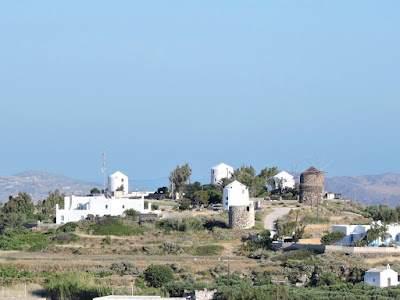 We went to Plaka, the capital of Milos, a couple of times.  The Red Bicycle cafe claims to have very good coffee (see the blackboard outside) - I can't confirm that, but its ice-cream is excellent. 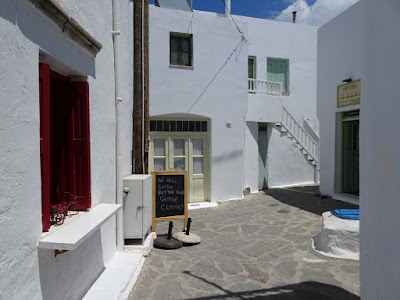 And later we watched the sun setting beyond the island of Antimilos from the courtyard of the church in Plaka. 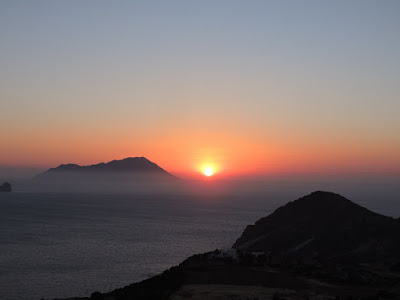 We were too late for most of the spring flowers, but the caper bushes came into flower while we were on Sifnos.  We were told that capers cannot be cultivated, but there are plenty growing wild in the dry-stone walls - and there was no shortage of pickled caper buds in the salads served in the tavernas. The flower looks quite exotic. 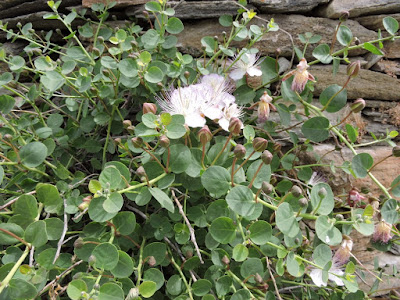 And at Filakopi, the site of a Bronze Age settlement by the coast on Milos, there were large areas of sea lavender in flower. 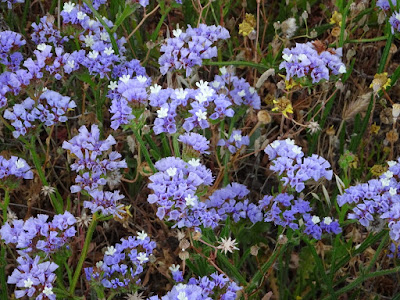 And there was bougainvillea flowering in gardens and on houses in the islands, and in Athens. 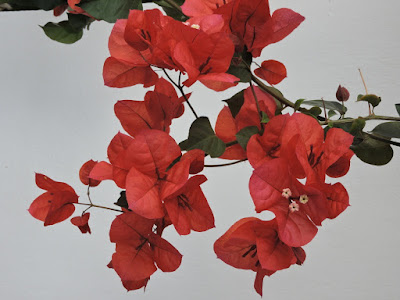 So then we had four full days in Athens, and visited the Acropolis of course, and the Acropolis Museum, the Agora, the Olympeion, the Archaeology Museum (a wonderful place - we spent a whole day there), the Kerameikos and its museum, the Filopappus Hill....

Here are just a couple of the less familiar things that I particularly noticed.  First, a strange object from the Archaeology Museum.  It's called an epinetron, and it fits over a woman's knee and thigh, and the rough area on the top is then used to card wool. 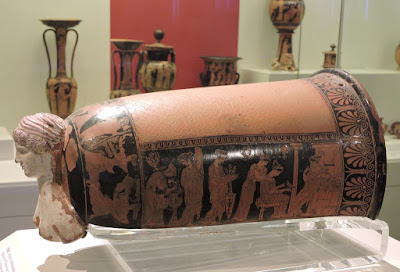 It seems a bizarre and not very efficient way to card wool, but is also notable because the lives of women (apart from goddesses and courtesans) are not very evident in the museums of Athens.  The Acropolis Museum has a display on marriage in ancient Athens, and from that and elsewhere it seems that women from well-to-do families really didn't have any life outside the home - and in the home, once married, they ran the household, raised children and did a lot of spinning and weaving.  Not much of a life.

There are hundreds of Greek vases and other ceramics on display in the various museums of Athens - mostly from tombs, or votive offerings to temples.  The workmanship is astonishing, and here are two vases from the Kerameikos Museum that demonstrate that:  they are only about 4 inches or 10cm. high. 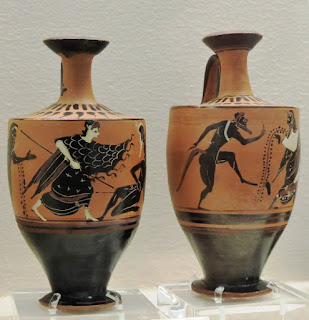 The one on the left shows Athena wearing what the Acropolis Museum says is her aegis - a goatskin cloak with snakes around the edge.   (Don't try this at home unless you are a goddess.)   But how the potter made such tiny vases and then painted such detailed images on them, I can't imagine.

And finally, another aspect of women's lives: pots of face powder, again from the Kerameikos Museum and again from a tomb. 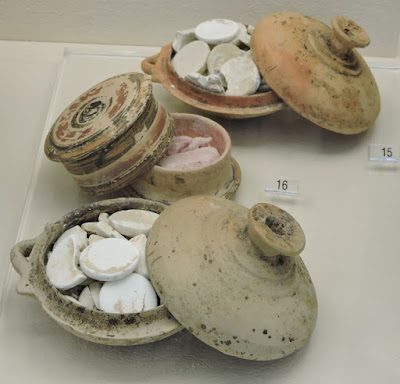 But how do they know it was face powder?  And why would you wear face powder if you never went out?  I don't know.

We did also see some interesting wildlife in Athens - a kestrel from the Acropolis, a couple of tortoises on the Filopappus Hill.  And, most exciting, we heard two hoopoes calling to each other, and eventually saw one of them on a dead branch at the top of a tree.  It spent several more minutes hoo-hoo-hoo-ing to the other bird, so John got some good photos of it. 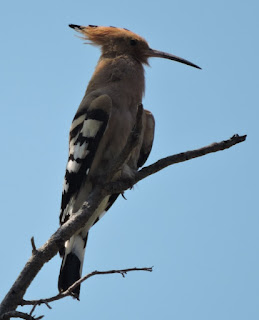 A wonderful holiday.
Posted by Barbara at 11:50