I've just been to Birmingham to do a workshop on twined knitting for the local branch of the Knitting & Crochet Guild.  It was a re-run of the one I've done previously for the Huddersfield branch, and at Sheringham in January.   I went by train on Friday morning, spent the afternoon shopping in John Lewis (lots of trying on, result: one pair of jeans, one pretty Seasalt cotton top).  I stayed overnight with Janet, the convenor of the Birmingham branch, and Francis,  and they took me to a very nice Moroccan restaurant for dinner.  On Saturday morning we went back to John Lewis, because the workshop was held in the Community Hub room there.  The workshop went well - everyone got the idea of twined knitting.  Most people got at least halfway though a wristlet, and one finished it.  (A couple of people weren't knitting a wristlet, because they preferred to knit flat, or else hadn't brought dpns, and so were just knitting a swatch to try out the techniques.)  From my point of view, as the teacher, it was very gratifying. Afterwards, I had coffee and cake with Janet and a few others, in the John Lewis cafe, another brief shopping foray (a pair of brogues, smart but comfortable), and then went downstairs to New Street station, which is handily underneath John Lewis, and caught a train home again.  Altogether a successful trip.

But on Thursday, in between printing off the handouts for Saturday, I had a brief panic: what was I going to knit?  I have finished knitting the Secret Project  (still secret) and the lace yoke cardigan  is at least 80% finished - I've nearly finished the first sleeve.  As it's knitted all in one piece, that means I have to carry around most of a cardigan, and it's too bulky to take on an overnight trip.  I didn't have anything else planned, but I couldn't possibly go to a KCG branch meeting without some knitting.

I thought of starting something with some yarn I bought from the destash table at last year's Guild convention.  It's Rowan Linen Drape (now discontinued) - a linen and viscose mix that I thought would make a nice summer scarf for cool summer days (i.e. most British summer days).  I had already looked around for lacy scarf patterns and hadn't seen anything that appealed.   So finally, as a desperate measure, I decided to take a ball of the yarn and some suitable needles and invent something.  I'm making it up as I go along, which means a lot of backtracking, but I'm pleased with how it's turning out. 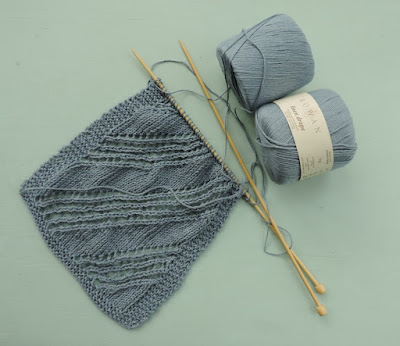