Yesterday the weather was forecast to be dry and sunny, and it was. So we went to Harlow Carr garden near Harrogate to see the autumn colour.  A little bit late, because many trees had a carpet of fallen leaves around them.  But we haven't had much wind lately, so there were still a lot of leaves clinging on.

As well as garden trees like the acers, including some with bright red leaves, and the tulip tree with golden leaves, there is a large area of woodland at Harlow Carr, and mature woodland trees around the garden, mostly oak and beech. 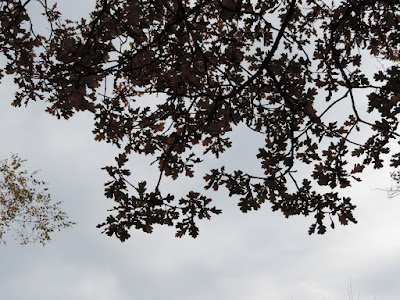 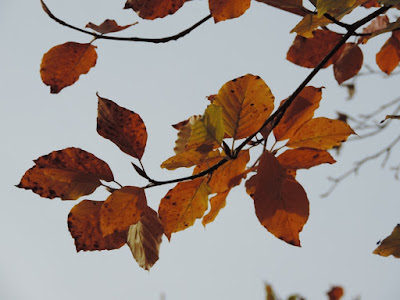 Some of the dead flowers and seed heads are just as attractive, too.

A grove of aspens had lost all their leaves, but the bare trunks looked beautiful when the sun caught them.  (According to the label, they were the European aspen, Populus tremula, and not the North American aspen, Populus tremuloides.  They are both called Quaking aspen, hence the Latin names, and both propagate by suckers, forming groves.  It's very confusing.)

Close to, the bark is beautifully patterned.

And a few plants were producing out-of-season flowers. 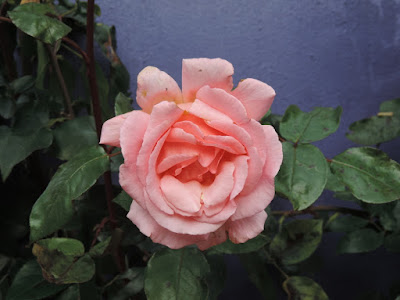 But it was much colder yesterday than it has been, so in spite of the rose and the primulas, winter is just around the corner.
Posted by Barbara at 17:34