This is a belated report on last week's study day in Glasgow on 'Knitting in Wartime', part of the Knitting in the Round project at Glasgow University.   It was an interesting programme (you can see it on the project web site) and there were about 70 people in the audience. Jane Tynan talked about knitting comforts for the troops in the First World War, and Maggie Andrews about knitting in both world wars.  Maggie also talked about the Womens' Institute, found in the U.K. in 1915, and so deeply involved in the home front during the war, and again in WW2.  Joyce Meader  brought two huge bags of knitted comforts for the troops, most of which she has knitted herself from patterns from the Crimean War onwards.   She also brought along many of the pattern booklets and a sock machine.  Wendy Turner talked about the Glasgow Women's Library, where she is the museum curator, and brought along a selection of knitting patterns from the library collection.  She says they have boxes and boxes of knitting patterns, completely unsorted so far.  (I felt quite nostalgic - the Knitting & Crochet Guild collection of knitting patterns used to be like that!)

And finally, I gave my talk on knitting & crochet in the First World War,  "Useful Work for Anxious Fingers".  I emphasised the crochet part more than usual, so as not to overlap too much with Jane and Maggie's talks,  though the title doesn't really apply to some of the crochet, which was not very useful and often didn't show much sign of anxiety about the war either.   I took along a replica of a little bag to put sugar lumps in when you went out for afternoon tea.  The pattern was published in Needlework for All in April 1918 - by then, imports of sugar and other foodstuffs had been seriously affected by the success of German U-boats in sinking British merchant shipping, and sugar was rationed. The magazine's description says "The modern anxiety is not how to manage on a limited supply of sugar, but rather how to get the most fascinating yet practical receptacle for it," which seems an incredibly blinkered attitude in 1918, when there were so many more serious things to be anxious about. 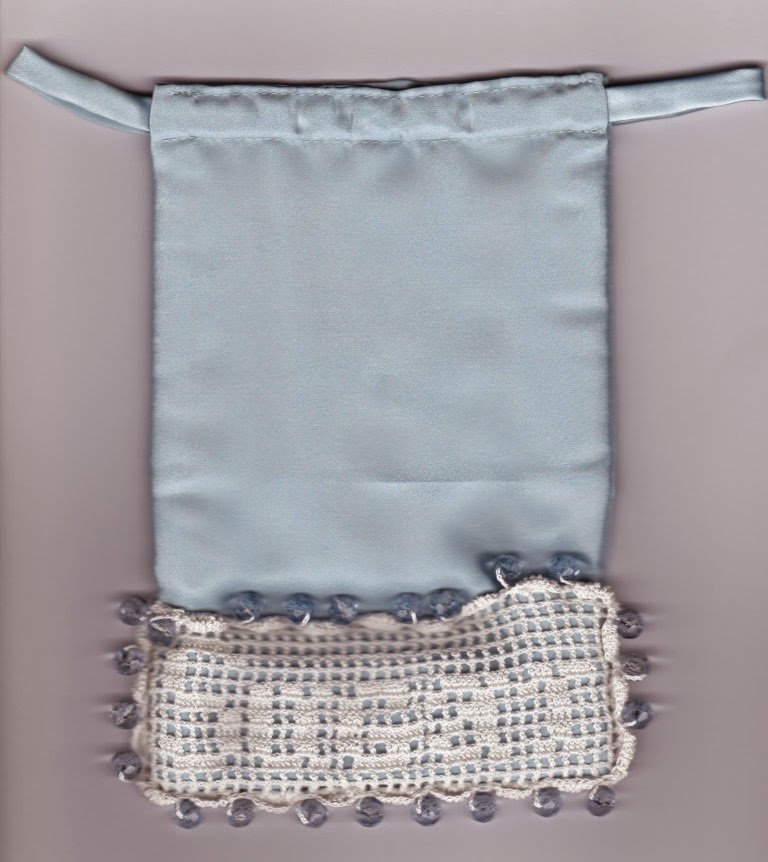 The study day was held at The Lighthouse, based around the old Glasgow Herald building, which was an early design by Charles Rennie Mackintosh in 1895.  You can go up to the top of the tower of the old building (originally a water tower) and get a good view over the roofs of central Glasgow.

I liked these signs for the loos, in the recent extension to the building.  (I read somewhere that these signs are called sex symbols, which would also be pretty hilarious.  Not sure it's true though.)

Just before the train left Glasgow station on the way back, the conductor did the usual announcement about the departure time, destination and intermediate stations, finishing with something like "The train will be leaving shortly and if you are not planning to travel, now would be a good time to leave the train and absquatulate."  What?  When he came round to check the tickets, I asked him to repeat the word, and whether it is genuine.  He assured me that it is, and that he had learnt it at school. He had put it in because the train staff have been asked to make their announcements more distinctive and  personal, compared to the bland automated announcements.  He wrote it down for me, and I looked it up when I got home.  Sure enough it's in the Shorter Oxford English Dictionary -  a "U.S. formation of  jocular use"  (19th century), meaning "to decamp".  I must use it in future whenever possible.