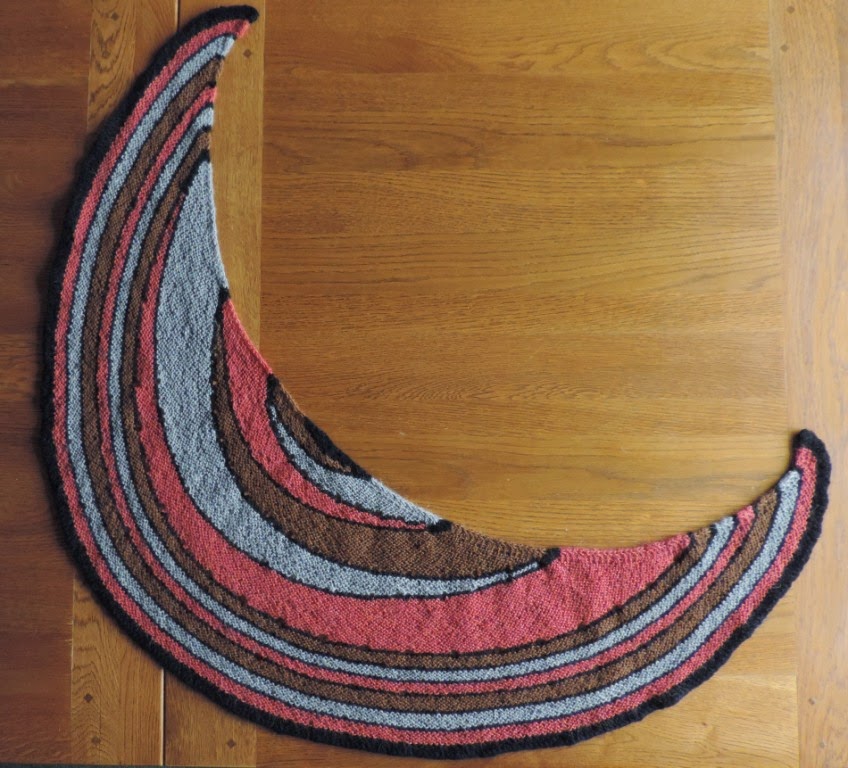 I had some alpaca yarn left over from the Color Affection shawl I knitted two years ago, and so I have been on the lookout for another project to use up the surplus.  Then a few months ago I read something about a mystery shawl knit-along by Stephen West.  I haven't ever knitted any of his designs but I have seen some and they are very striking.  I read about the proposed shawl - at this stage there were no details, just some information about how much yarn you needed and how to choose suitable colours.  You needed a contrast colour that would stand out against each of the other three colours (which could be my left-over pale grey, orangey-pink (Poinsettia) and light toffee brown (Demerara).  It sounded intriguing and exciting, and I had just enough left over from Color Affection, if I chose a contrasting yarn in the alpaca to go with it.

So I bought an extra ball of black (Liquorice) as my contrast, and signed up for the knit-along.  The pattern arrived in four weekly instalments, and I started happily on week 1, which was just what I wanted - very dramatic and interesting to knit.   It has swooping curved wedges of garter stitch, getting progressively larger, in the three toning colours, and outlined in black. The shapes are created with short rows and the increases are kind of naturally built in to the turns of the short rows - very clever.  And the edge is finished with i-cord - very clever.

But I don't think I'm really cut out for a knit-along - by the end of week 3, lots of knitters could hardly wait for the final instalment so that they could finish their shawl, while I was still working on week 1.

And then I hit a major snag - when I came to look at the week 2 section of the shawl, I didn't like it.  The week 1 section was all in garter stitch, but then it switched to two-colour brioche.  I didn't really like the look of it, and I didn't think that changing texture in that way was what I wanted to do. (Sorry Stephen, but it's my shawl.)   That's an obvious potential hazard of a mystery knit-along - you embark on a piece of knitting, hoping that you are going to like it, even the parts you haven't seen yet.

Also, by then I had decided that I wanted quite a small shawl, just to wrap around my neck.  I decided to do just a few plain bands of garter stitch, and then finished with an i-cord edging.  (Though actually, Stephen's final section, a zigzagging band of the contrast colour, looks very good   - maybe I should have skipped weeks 2 and 3, and gone straight to week 4.)

So now I have finally finished it (I finished the knitting weeks ago,  but it was waiting for me to sew in the ends) and it's lovely. Very warm to wear around the neck.  Much more dramatic than almost anything I have knitted previously.  It's amazing how different the three colours that I used in Color Affection look in this shawl.

And I should say that I am evidently in a small minority (of one?) in not liking the whole of Stephen's design.  The pattern has now been named Exploration Station (available for sale through Ravelry), and it has nearly 1800 projects listed in Ravelry, to date.  There are lots of comments from knitters who especially liked the brioche stitch section.  OK - I'm odd.

I haven't even succeeded in using up my left-over yarn.  Because my shawl is a lot smaller than intended, I've still got some of each colour left (though obviously less than I had), and now have some left-over black too.  So now I need another project that uses small quantities of three toning colours and quite a lot of a contrasting colour...   This could go on indefinitely.