I mentioned to a friend that until relatively recently, the people who designed knitting patterns were largely unknown to knitters and that it's sad that they never got any recognition.  She told me that her mother had had a friend, Elizabeth Forster, who designed knitting patterns and, what's more, had written a book.  The book, The Wandering Tattler, is not about her work as a designer, except incidentally.  It's about her travels in South America and Asia, and the birds that she saw - she was a keen ornithologist.  (The wandering tattler is a species of bird.)    It's easy to find cheap secondhand copies of the book online, so I bought one. 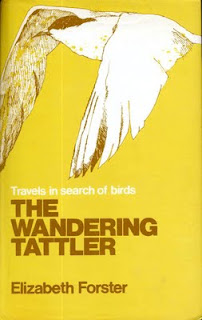 She gives a brief outline of her life in the book.  She started working for the BBC in 1930, and after World War II began a parallel career as a freelance designer of knitting patterns, eventually giving up the BBC job in 1955.  In the 1960s and 1970s she evolved a routine of creating designs until she had accumulated enough money to pay for her next trip. Meanwhile, the things she saw on her travels gave her ideas for designs when she came home again.  Sounds like a good lifestyle.  In the book, published in 1976, she says "My ideas [for designs] come from textiles in museums, from baskets, from folk weaving.... The floors of Indian temples have provided several good designs, while another came from the floor of the university in Cuzco, Peru, and yet another from a pair of gloves which I found hanging on a stall in a small village in Afghanistan."  She shows two of her designs in the book, inspired by her travels in Peru and Guatemala, both for Wendy Wools. 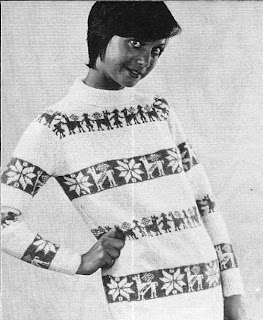 And then, while I was sorting through papers from Lee Mills, I found a knitting supplement from Woman magazine, dated October 1957, with patterns for ten jumpers "by top British designers". It is unusual to find any acknowledgment from magazines of that period that the knitting patterns have been designed by somebody, so I took a look. The 10 jumpers are designed by 9 women I had never heard of .... and Elizabeth Forster. 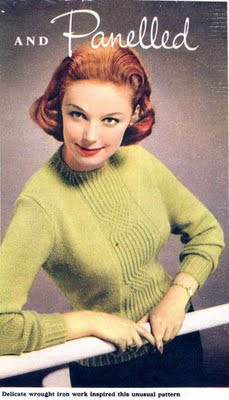 Hers is, I think, more interesting than most of the others. It has an intricate panel of interlaced single cables on the front, and the caption says that it was inspired by wrought iron work - perhaps seen on her travels.

I don't know whether it will be possible to identify any more of her designs - I'm not sure how it could be done. But I am pleased to have brought together these three, at least.  She seems to have been an interesting person and an interesting designer.
Posted by Barbara at 21:03