Mary Quant at the V&A

Last week we were in London for a few days and I took the opportunity to go to the Mary Quant exhibition at the Victoria and Albert museum, before it closes on 16th February. (It's then going to the V&A Dundee, I believe.) 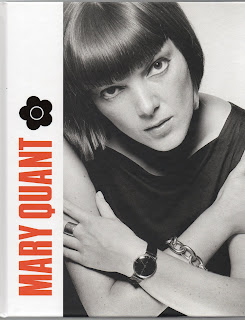 The exhibition was busy, with many visitors who were old enough to remember the 60s, and who were reminiscing about the styles.  I was a teenager in the 60s myself, though I also remember that stockings were only replaced by tights quite late in the 60s, and stockings were horrible garments — for me, that made some of the early designs look less free and easy than they might.  If you were already grown up in the early 60s, I'm sure that in comparison with 1950s styles, they were much less constrained.

Apart from the spectre of stockings, I enjoyed it very much and thought it was an excellent exhibition.  Many of the garments on show had been given or lent by the women who had worn them when they were new, and had treasured them ever since.  Often there was a photo of the owner, wearing the garment, perhaps for a special occasion, and often a page from Vogue or Harper's Bazaar, showing how it was originally portrayed in the fashion press.  It was helpful that the prices were translated into modern values&nbsp— in the early 60s, when Mary Quant was designing clothes for her Bazaar shop in Chelsea, the clothes were made in small quantities and were expensive.  It was only later, when her designs were mass-produced, that they became more accessible.

I was, of course, on the lookout for knitting. I know that in 1965 and 1966 Mary Quant produced  two collections of designs for hand knitters (and crocheters) that were published as knitting pattern leaflets — we have many of the leaflets in the Knitting & Crochet Guild collection.  I wrote here about the Patons pattern leaflets with Mary Quant designs, and I knitted a Mary Quant short-sleeved jumper from a Lee Target leaflet myself a few years ago, which I showed here.   The exhibition had a case devoted to the knitting patterns, and to the dress patterns for Butterick also designed by Mary Quant.  (My mother made a dress for me from one of the Butterick patterns, in the mid 60s, but the dress is long gone, and I don't have any photos of it, sadly.)

Several of the knitting patterns were on show, and an actual dress, knitted to a Sirdar pattern. It's one of the 1966 collection, with Mary Quant's daisy motif in the background, and also on the pocket of the dress.  (The exhibition label gives  'Candytwist' as the name of the design, but that is actually the name of the Sirdar yarn that the leaflet specifies — unlike Mary Quant's other designs, those in the knitting patterns don't have names.)

The model on the pattern leaflet is Jill Kennington (now a photographer), who appears on several of the other Quant knitting patterns too — I liked the fact that exhibition names the model in many of the photos that publicised Mary Quant's designs.  There are several models that appear over and over again in knitting pattern leaflets, so you recognise their faces, but usually you don't know their names — it seems a great pity to me that they aren't better known.   As well as modelling for the 1960s leaflets, Jill Kennington appears in a video made for the exhibition, talking about the experience of being a model for Mary Quant, and the contrast with the 1950s, when models were elegant, stately and aloof. 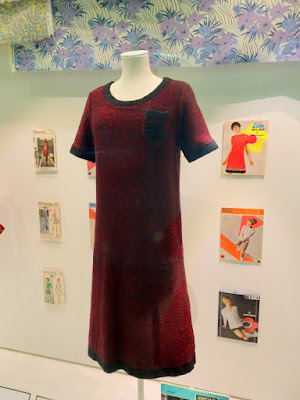  
Here's the dress in the exhibition that was knitted to the Sirdar pattern.  (I'm sorry it's not a very good photo, through the glass of the case.)  The dress has been given to the V&A and was knitted by the donor's mother, for the donor, who described it as "a labour of love".

I looked for knitwear elsewhere in the exhibition, too, but the only knitting I spotted was part of a dress, designed by Mary Quant in 1964.  Most of the dress is made of checked flannel, but the sleeves, collar and belt are hand-knitted in cream wool. 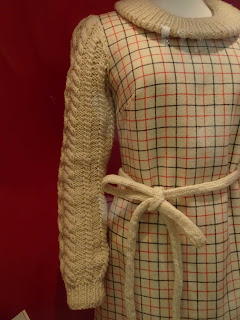 It was featured in Harper's Bazaar magazine in August 1964, where it was described as "Tattersall check flannel shirt dress with knitted sleeves, collar and skinny belt by Mary Quant, 15gns. at Bazaar."  In the magazine, it was modelled by Grace Coddington (now creative director at American Vogue), and there's also a photo of Mary Quant wearing the dress, posed with Vidal Sassoon trimming her fringe.  15 gns. (guineas) is equivalent to £15.75, which doesn't sound a lot, but its value today would be over £320.  As the exhibition notes, it was not a suitable design for mass-production.

But of course, there is plenty of other material in the exhibition, from underwear and make-up to quite formal evening wear.  Some of the early designs, made in small quantities, are beautifully made, with details that would be impossible, I think, to mass produce.  Well worth seeing.  And there's a very well-illustrated book to go with the exhibition, too.  (See top photo. Yes, I bought a copy.)
Posted by Barbara at 17:44