The volunteers working on the Knitting & Crochet Guild Collection have selected 100 objects to show the range of the collection — including knitted and crocheted garments, books, pattern leaflets, gadgets, and many other things. Currently, the objects are being posted on social media (the Guild website, the KCG Facebook group here,  and on Instagram, user name @kcguild), one each day.  Today's 'object' (number 10) is a group of holders for knitting wool or crochet cotton, that hang from the wrist on a bracelet, including a crochet ball holder like the one in the photo below; here's some more information about it.

We have several in the collection of the same design, some in their original cardboard box, saying either 'The "Ownlee" Practical Crochet Ball Holder',  or 'The Wristlet Crochet Ball Holder' on the lid. The holders have a patent number (on the base of the flat circular disc) and some of the boxes, like the one on the photo, still contain printed booklets, so it's possible to find out quite a lot about their history.


In case it's not obvious, here's a drawing showing how it's to be used. 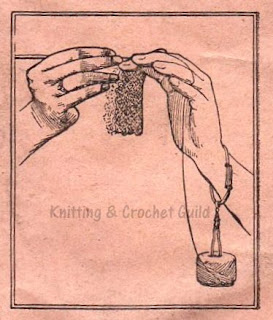 The idea was patented in 1912, by George Garratt Kent, who lived in East Finchley (London).  Crochet cotton, then as now, was sold ready wound into balls.  The crochet ball sits on the metal disk, with the bent wire going through centre of the ball.  The holder can swivel freely, hanging from the bangle.  An improvement, patented in 1913, that the disc is not rigidly fixed to the bent wire, but hinged.  George Garrett Kent was born in 1875, and in the 1901 census, he is listed as a wood engraver.  In 1911 and 1939 he is listed as a commercial clerk and then an estimating clerk, but with a mention of illustrating and engraving, so his occupation would have given him the practical skills to design the ball holder and make a prototype. 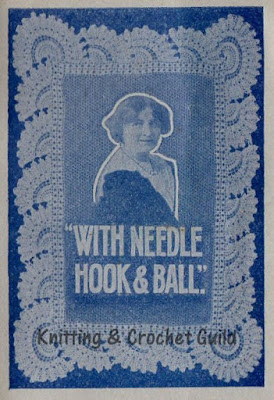 The history of the “Practical" Crochet Ball Holders begins like a fairy tale, with "Once upon a time", but the "time" which this "once" was upon, was only a year or so ago, and this is not a fairy tale, but a true story. A man and his wife went to the seaside for a holiday. "Little drops of water, little grains of sand" got all mixed up with the lady's ball of crochet cotton because, like Humpty Dumpty, it "had a great fall" and rolled about on the beach. Along came Old Mother Hubbard's dog, which had "none" (meaning bones) and playfully attempted to carry the ball home to his empty cupboard. When a big "spider sat down beside her" and frightened the lady away, the man could stand it no longer. He dived into the recesses of his productive British brain, and Jack-Horner-like, pulled out a "plum" which was the original idea of the Practical Wristlet Crochet Ball Holders.
Naturally, the lady was pleased with the clever little contrivance which kept her ball just where she wanted it, and she showed it to her friends. So, like a snowball, which is formed with a handful of snow, and then set rolling down-hill, moving faster and growing bigger every moment, so the "Practical" Crochet Ball Holder started, gaining popularity every day, each sale resulting in the sale of many more, until it has become necessity to everyone who does crochet or knitting work, and is sold in nearly every country on the globe.

Presumably, it was George Garratt Kent who was at the seaside with his wife, and inspired to invent the crochet ball holder. The booklet goes on to show two related gadgets that were patented jointly by George Garratt Kent and The Practical Novelty Company. 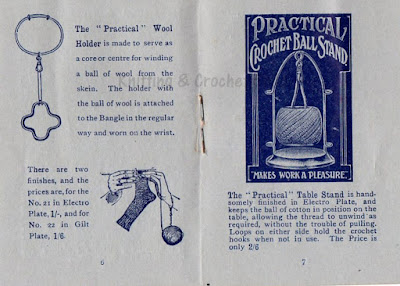 The "Practical Wool" Holder is the result of a demand for something to hold a ball of wool, as wound from the skein. The Table Stand is also an evolution, and appeals to ladies who prefer to keep their ball in place on the table, instead of on the wrist.


I don't think we have either of those in the KCG collection, which suggests that they weren't as successful as the Wristlet Crochet Ball Holder.  The booklet goes on to give prices for the Wristlet Crochet Ball Holder in various materials, from an Electro Plate Bangle with a Nickel Plated Base, at one shilling (5p) — 'quite good enough for ordinary use, at home or at the seaside or country, where one works a great deal out of doors, and the damp air is fatal to ornaments.'   The most expensive is either a Sterling Silver bangle with silver plated base, or Rolled Gold, both at 5 shillings (25p) — for 'those who wish to give a pretty present to those near and dear. Young men find them just the thing for the "dearest girl" and fond parents present one or the other to the young lady daughter who likes all the appointments of her work basket to be dainty and attractive.'   Finally, the booklet mentions the "Ownlee" crochet ball holder, shown in the photo above, which is the cheapest option, at 6½d  (about 3p).  I think that all the ones that we have in the collection are the cheaper ones.  (For comparison with prices of modern gadgets, 5 shillings in 1913 would be worth about £30 today.)

The gadgets were widely advertised in needlecraft magazines, with a warning to beware of inferior imitations.  But I don't think it was advertised after the First World War — a pity, because it's an ingenious idea which would still be useful now for anyone who uses crochet cotton. 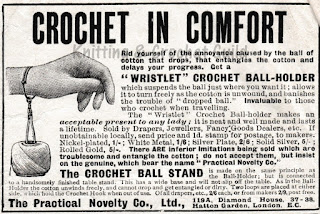 Finally, we have a photo in the KCG collection which shows someone using a Wristlet Crochet Ball Holder, or something very like it.  It's a charming portrait. 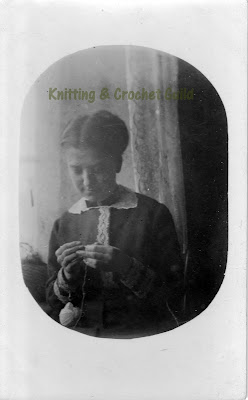