I'm still catching up on writing about Shetland Wool Week, and this post is about the talk I gave at the Shetland Museum as part of the Wool Week programme.  My talk was on the Knitting & Crochet Guild, but mostly about the Guild's collection. I talked about a few selected pieces from the collection, and we had a display of the actual items at the front of the auditorium, so that the audience could have a close look, before and after the talk.

I picked some things that had a particular connection to Wool Week, including a few that originated in Shetland.  But this post is about one of the pieces on display that has nothing to do with Shetland, or wool, for that matter.  I chose it because it's relevant to 2019 - it was made exactly 100 years ago, in 1919.

It's a tea cloth with a filet crochet border, and a linen or cotton centre with drawn thread work.  There are doves with sprigs of olive in their beaks along the sides, and 'Peace 1919' in each corner.

We know that the First World War ended on November 11th 1918, but strictly speaking that was the day of the Armistice between the Allies and Germany.  Formally, the war ended with the Peace Treaty signed in 1919 - so that many war memorials in Britain give the dates of the war as 1914 to 1919. (The Shetland war memorial in Lerwick does, in fact.)

There were peace celebrations in the summer of 1919, and someone must have made the 'Peace 1919' tea cloth then, and perhaps used it at a celebration tea party. Before I went to Shetland, John and I set up a tea party setting, with the tea cloth, and a filet crochet tea cosy that was also made in 1919, with the slogan '1914 1919 Victorious Peace'.   You can also see a set of First World War medals on the table, that belonged to one of John's grandfathers.  The cloth only fits a very small table, as you can see, so it must have been an intimate, rather low-key tea party. 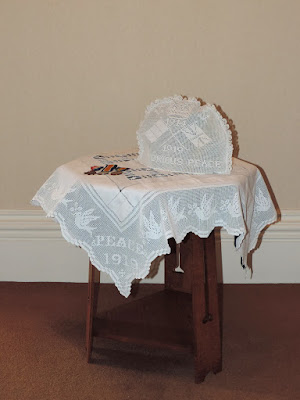 Here's a better view of the 'Victorious Peace' tea cosy: 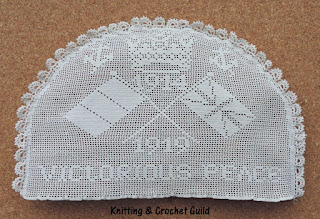 I wrote about the tea cosy here, after I had found the pattern for its other side (which shows a very decorative, slightly Art Nouveau teapot) in a 1918 issue of Woman's Weekly magazine. 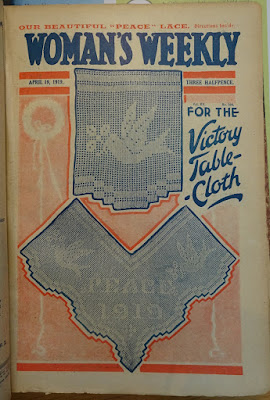 The magazine gave instructions for a corner, and for one of the doves along the side of the border. So you could make your table cloth as large as you wanted, just by adding more doves.   For comparison, here are a corner and a dove from the edge of our tea cloth. 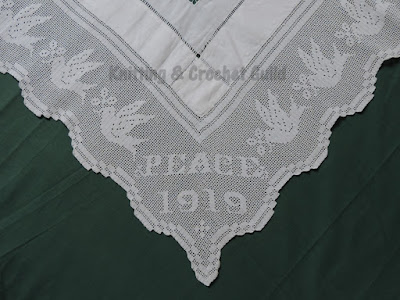 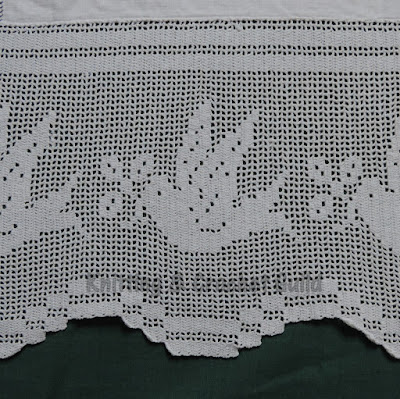 And I did eventually find the pattern for the 'Victorious Peace' tea cosy - not in Woman's Weekly, but in another weekly magazine for women, Home Companion, in the August 2nd issue. 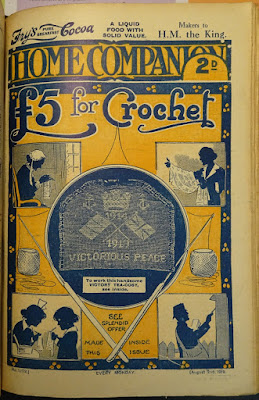 (Home Companion is long gone - it ceased publication in 1956 - but Woman's Weekly is flourishing, and still publishes knitting and crochet patterns. )

The Peace 1919 tea cloth is a really excellent piece of work.  The crochet is very even, and the border fits the centre cloth exactly.  I'm not sure how that was done: it would be very difficult to make the border to a precise size, I think, so perhaps the cloth was made afterwards.  Not sure. And though I know almost nothing about drawn thread work, I am very impressed by the quality of the work in the centre of the cloth.  Here's a corner of the drawn thread work, and a close-up of a detail - so painstaking, to weave the fine cotton around the threads to make something quite solid again. 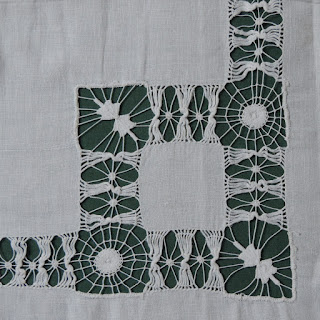 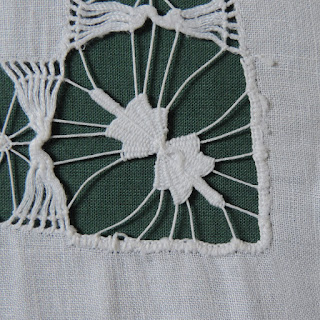 Making the cloth must have taken many hours.  And I wonder how often it was actually used - perhaps a few times in 1919, but maybe not much after that?   It has survived in very good condition, which suggests that it might have spent most of the last hundred years in a drawer.  Now it commemorates not just the end of a dreadful war but the skill of its unknown maker, too.

PS Apologies for the quality of the photos. The cloth is actually quite white, even though it looks grey-ish in the photos.  Flash washes out the detail, and increasing the contrast after taking the photos looks artificial.  Ignore the grey, and just imagine that it's white.
Posted by Barbara at 22:34