Every year, there is a special Wool Week hat, with a free pattern, and the idea is to wear it then so that fellow knitters can recognise you.  This year's pattern (available here) is the Roadside Beanie, designed by the Wool Week patron Oliver Henry.  I started mine at the end of April, and finished the knitting months ago, but only blocked it and sewed in the ends last week.  I took it to the Huddersfield Guild meeting on Thursday for the show-and-tell session which we have at the start of every meeting, and a friend took a photo of it. 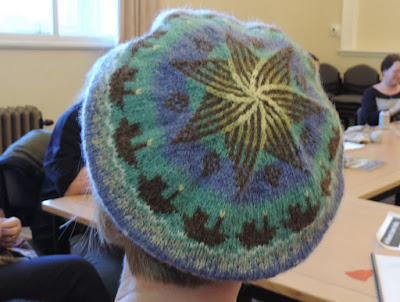 Here's another photo, posed on a mixing bowl, to show the band of sheep around it, and the corrugated rib: 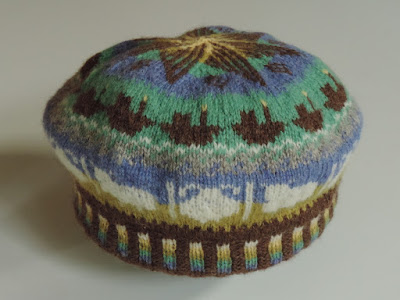 Back in April, when I was planning my beanie, I looked through the suitable wool that I already had, and found these colours: 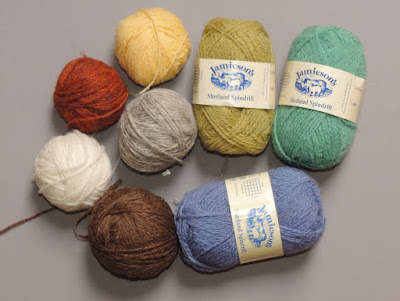 The three balls of Jamieson's Spindrift, in Chartreuse, Jade and Parma, I bought a few years ago, when a local yarn shop closed.  I didn't then have any plans for them, but they were a bargain. And now I have found a use for them.   The other five colours were left over from a pullover that I knitted for John more than 30 years ago.  He posed in it for the very first post in this blog, in 2010. 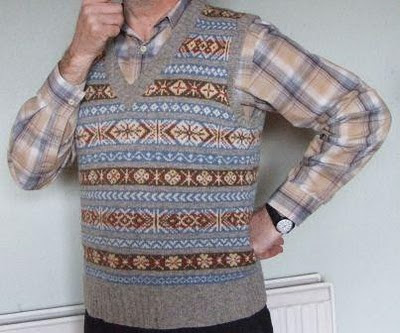 The pullover is from Sarah Don's book, Fair Isle Knitting, which I bought in 1981.  I used the colours she suggested: moorit, cream, blue, rust, yellow and grey.  As far as I remember, I wrote to either Jamiesons or Jamieson and Smith, in Shetland, to order the wool.  (No online shopping back then, of course.)   When I was looking for wool for my beanie, I couldn't find any of the blue left over, and I didn't in the end use the rust.  Being a conventional sort of person, I did feel that the grass should be green(ish), the sky should be blue(ish), and the sheep should be a possible sheep colour.  I think it's worked out very well, and I particularly like the corrugated rib, with a moorit background and the ribs shading through parma, jade, chartreuse, yellow and cream.   I'm looking forward to wearing it for Wool Week.
Posted by Barbara at 15:49