I'm not suggesting that I am about to make Fair Isle knitting easy - the post title comes from a Weldon's Sixpenny Series booklet that I have been scanning to put on the Knitting & Crochet Guild website, for members to download.


Weldon's published over 300 titles in their Sixpenny Series, in the 1920s and 1930s.  They aren't dated, so I might try to assign dates to them myself in a later post, as I did for Fancy Needlework Illustrated. I can at least date this issue, No. 217, fairly confidently to 1930 - it has an ad for a Patons & Baldwins pattern, which also appeared in another publication dated November 1930.

Why did Weldon's claim that the booklet made Fair Isle knitting easy? Largely because the colour patterns were charted, rather than being written out row by row, as was usual at that time (and still common much later, too).  The introduction says :


"In view of the enormous popularity of Fair Isle Woollies, the following "Easy-Way" method of knitting these designs has been devised. This method obviates the use of long and tiring directions which are substituted by simple charts, showing the pattern at a glance. These charts arc extremely clear as each square represents a stitch, and each sign a colour. A ruler laid across the chart above the row being worked, greatly helps in keeping the place."

Here's one of the charts, which now seems perfectly ordinary to knitters:

But Weldon's had to explain using charts to knitters who had never used them before, and probably never seen them before.  It was especially tricky here, because the designs in the booklets are knitted in the round up to the armholes, and then knitted flat up to the shoulders; the sleeves are knitted flat from the cuff upwards.   So the booklet has to explain how to read the chart when working in the round ("the chart must always be read from right to left"), and then how to read them when working flat, with alternate rows of knit ("plain") and purl: "The plain rows, which are the uneven numbered rows, are read from right to left of the charts, and the purl rows, which are the even numbered rows, from left to right."

The charts also show the shaping for the neck, armholes and sleeves, which is also explained very carefully.  (Of course, the patterns are all given in only one size, which simplifies showing the shaping on a chart.)  There's also advice about using a "a piece of coloured thread knitted in with a stitch" to mark the start of each round - which sounds like a separate piece of thread for each round, rather than how we would use stitch markers now.

The booklet also explains how to hold one strand of wool in each hand when knitting Fair Isle patterns (though only when knitting in the round or on the knit rows in the flat sections).  I was surprised to see this useful advice given so early.  Many Fair Isle pattern leaflets published much later than this leave the knitter to work out for themselves how to work with two strands of wool at the same time.

Now for the designs. The two on the front cover are to "complete your sports outfit".   There are only two different patterns in each, one wide band and one narrow, but "an elaborate effect is achieved by reversing the colours" on alternate wide bands, which is a clever idea.  Here's another view of the  man's sweater: 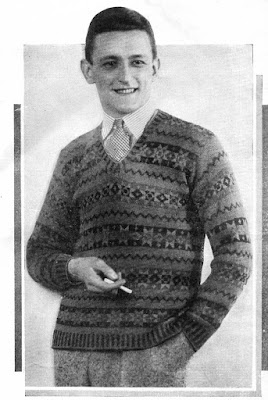 The instructions say that "this pullover can, if preferred, be worn tucked in, as shown on the cover, in which case a deep welt is worked in place of patterns at the lower edge." In my view, wearing it tucked in is very wrong indeed, so I am glad to see that there is a more sensible alternative.

There is another woman's sweater like the cover design, of a similar shape with patterned bands all over and a V neck (and also shown worn with a beret). It's suggested that this is to wear with a tweed suit, "for sports and general wear". 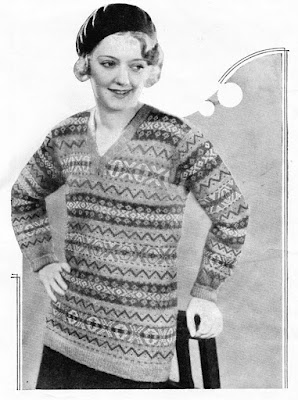 And the third jumper for women is the "Heath" design, with Fair Isle bands around the lower edge, around the cuffs, and bordering the V neck. I like this one a lot. 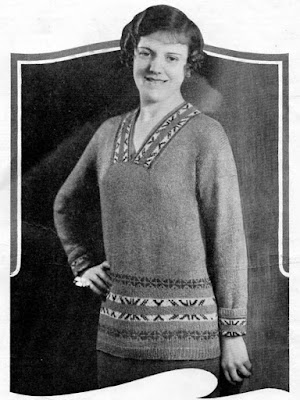 And finally, there is a sleeveless pullover, billed as 'a well-fitting "tuck-in"'.  (Noooo!  Don't tuck it in!) 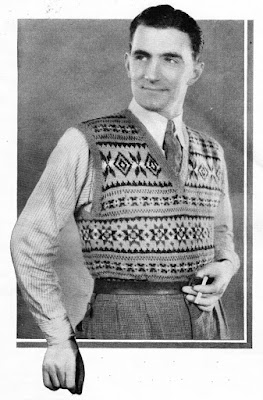 Apart from the tuck-ins, the designs are very attractive. I think it's interesting, too, that the instructions are so technically advanced.  Many "Fair Isle" patterns published in Britain, even decades later than this one, instructed knitters to work all the pieces flat, with front and back knitted separately.  Recent Fair Isle sweater patterns are more likely to tell knitters to work in the round throughout, with steeks at the armholes and neck.  I don't know when steeking instructions were first published in this country, but I would have been astonished if they had appeared in a 1930 booklet.

I would love to know whether any Shetland knitters were consulted about techniques, or designed any of the sweaters. But it was very rare to name the designers at that time, and this booklet is no exception.

Knitting & Crochet Guild members will find a pdf copy of the booklet on the Guild website under Membership and then Pattern Downloads.  (If you aren't a member and are interested in vintage knitting and crochet publications, you might consider joining - Guild membership is open to anyone.)
Posted by Barbara at 17:48