On Saturday, I went to Lincoln with a suitcase of some of my favourite pieces from the Knitting & Crochet Guild collection, to show them to the local Guild branch. I shan't write about most of them here, though one that has already had a post to itself is the "Victorious Peace" tea cosy -
an obvious choice as it has the date 1919 worked into the filet crochet, so this is its centenary year.

I also took a few crocheted gloves, which I think are fascinating.  I don't ever want to wear a pair, but they represent the way that women once wanted to look.  Once upon a time, ladies were not properly dressed out of doors without a hat and gloves.  In winter, gloves had an additional function in keeping hands warm, but in summer, they had to be cool and preferably light coloured.  In the 1940s and 50s, patterns appeared for summer gloves crocheted in cotton. We have many of the patterns, and at least a dozen pairs of the gloves, in the collection.

Here are two pairs I showed on Saturday: a white pair with a very open pattern of ovals on the back of the hand and the fingers, and around the cuffs. 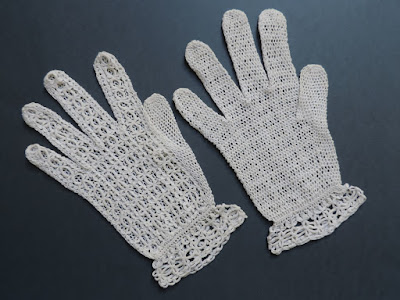 And a pale blue pair with a pattern of trefoils around the cuffs, and crochet buttons to fasten them - I think these are delightful. 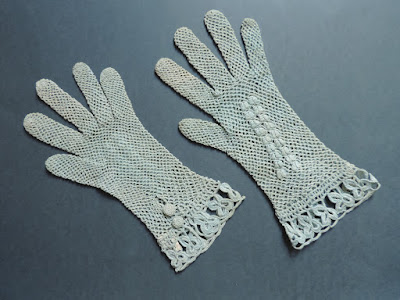 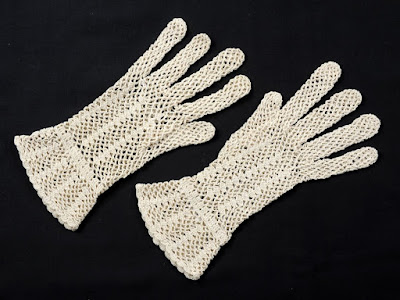 My favourite patterns for these gloves show the ideal look that the gloves were intended to complement.  Coats leaflet 298 is an example - it shows a sketch of a lady in a sort of New Look outfit, wearing the gloves that you could make from the pattern.


Inside are further sketches of various ladylike activities which would be enhanced by the gloves - drinking champagne, smoking a cigarette (in a holder, of course),....  All with a smartly dressed (no doubt rich and handsome) escort. 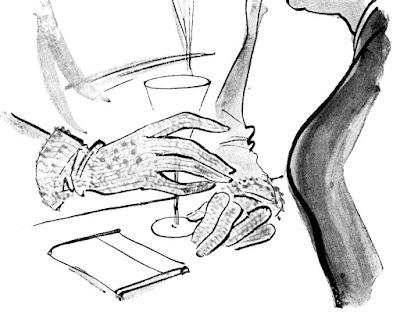 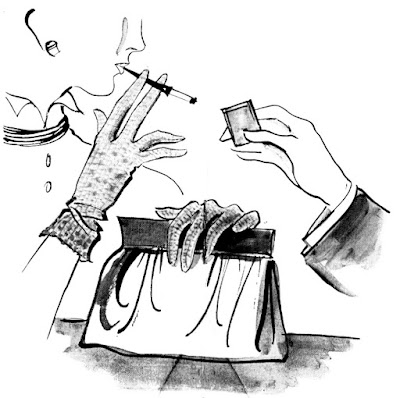 And Coats Book No. 405, with several patterns for crochet gloves, sets out what a pair of crochet gloves would offer: "Paris or Penrith, country or town, feminine fancy dictates crochet gloves for summer chic.  The 'finger tip-top' smartness of fashionable gloves in crochet gives that groomed, well dressed, finish to spring suit or summer ensemble.  Elegance, daintiness, delicacy, youthfulness -- take your choice from these inexpensive 'made-to-treasure' gloves."


They would certainly be inexpensive to make (if you are skilled with a crochet hook, which I'm not).  They are totally impractical for everyday activities, but they could look very pretty with a floaty dress at a summer wedding.  (Again, not for me.)

If you'd like to try making a pair, and you are a member of the Knitting & Crochet Guild, the Coats booklet is available to download from the Membership area of the Guild website. (And if you're not a member, you could join - membership is open to anyone.)