In the 1840s, a large number of books on knitting and crochet were published in Britain, to cater for ladies who were taking up these crafts as leisure activities.  Some of the authors who were writing in the 1840s continued to write books in the following decades - Jane Gaugain, Mlle Riego de la Branchardiere, Mrs Mee,...  Others wrote several books in the 1840s and then stopped.  And others wrote just one book and then seem to have disappeared from view.  Penny Hemingway has written about several of the more prolific authors in recent issues of The Knitter - here I'm writing about one of the last group: Marie Jane Cooper.   Her New Guide to Knitting and Crochet was published in 1847, and as far as I can tell, it was her first and last book.  (The Bodleian Library copy is available online from Google books.) 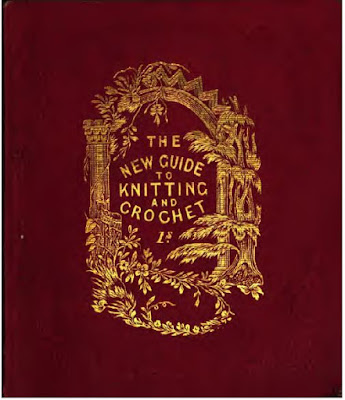 
Mr J. S. Cooper was obviously related to Marie Jane, and the title page describes his business as "Foreign and British Depot of Berlin Patterns and Materials for Ladies' Fancy Works", as well as the the Royal Marine Library.  So it was evidently not just a library but a needlework and knitting wool shop - what was then often called a Berlin wool repository.  (Berlin wool was wool from merino sheep, imported from Germany.)

So who were J.S. and Marie Jane Cooper?   Joseph Sidney Cooper was Marie Jane's father.  She was probably the eldest child of Joseph and his wife Anna Maria.  The Coopers were in Hastings from around 1839 onwards - Mr Cooper ran the Marine Library and Mrs Cooper the associated Berlin wool repository.

Mary Jane Cooper was only 20 when the New Guide was published in 1847.  She had probably worked in the 'Bazaar' side of the Marine Library for a few years by 1847, and in that case would have been very familiar with some of the books on knitting and crochet already published, and with what the lady visitors to Hastings wanted to make.  Even so, it seems extraordinary that a 20 year-old should have the confidence to write her own book, in competition with all the others.  In her preface, she says:


"I venture to publish THE NEW GUIDE TO KNITTING AND CROCHET, believing it will prove both instructive and amusing to those Ladies, whose taste leads them to such pursuits. The Authoress being practically acquainted with these Arts, she warrants them correct, and trusts they will meet with a favourable reception by the Public, and be found a useful appendage to every work-table.

The book has about 50 knitting patterns and about 20 crochet patterns.  There are only three illustrations, which makes judging them a bit difficult.  I have only looked at the knitting patterns, not being a crocheter.  Many of them are patterns for fancy stitches, and it is up to the knitter to use them in an complete article, but as well as those there are patterns like "A very handsome mat", "A bag to hold wools" and so on.  One of the patterns is for a Shetland shawl, and I tried a small swatch of the centre stitch pattern to see what it looks like.  Here's the complete pattern, so that you can see something of her style:

It's reasonably clear: she doesn't use abbreviations, and she uses 'purl' and 'knit' as we do now.  (Authors in the 1840s used several different words for purl, such as 'seam', or spelt it 'pearl'.)  It was slightly confusing at first that she uses 'bring the wool forward', 'wool in front', and 'make one' interchangeably to mean 'yarn over'.  And it could be very annoying if you were actually knitting a shawl, and cast on 'about 160 stitches', choosing a number divisible by 6, and then found after the eight rows of the stitch pattern that you should also have two extra stitches at either side.  But I had already planned a border all round my swatch when I read that part of the instructions.

Here it is, unblocked and knitted in 4-ply cotton rather than Shetland wool: 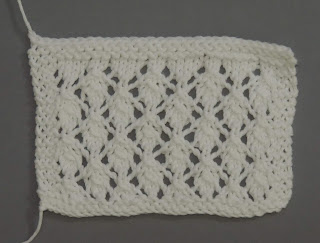 ( I really don't like sewing ends in, and when I'm only knitting a swatch to try out a stitch pattern, I don't bother.)

From the swatch, I recognised it as a pattern I have seen before.  I think it was a well-known stitch pattern in the 19th century, and we have an example in the Knitting & Crochet Guild collection on a pincushion. 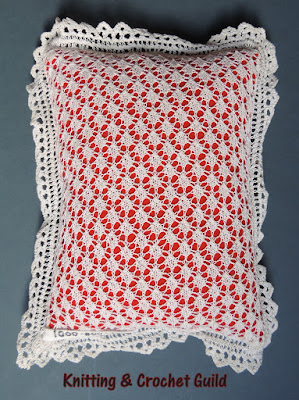 This is the underside of the pincushion - the other side has a more elaborate pattern, and has had to be mended (probably in Victorian times) because the pins have broken the threads. This side, protected from the pins, is in perfect condition.

Following the first publication of the New Guide to Knitting and Crochet in January 1847, 2nd and 3rd editions were advertised in local papers around the country in August 1847 and April 1848.  So it seems to have been a reasonably successful work.  But meanwhile, on 1st June 1847, Mary Jane Cooper married John Edwards of Aston in Warwickshire, now part of central Birmingham.  There's no clue as to how they met, but the family evidently had Birmingham connections - John Sidney Cooper was born there. She moved with her husband to Birmingham, and by the 1851 census she had set up in New Street as a Dealer in Fancy Goods and Berlin Wool (and had two children).  But she didn't write any more books, as far as I can find out.

In the next post, I'll write more about the family history, and three generations of businesswomen, including Marie Jane.