I have mentioned that the Knitting & Crochet Guild collection has moved to a new home - we have now been based in Slaithwaite for two months.   You might like to see some photos of the village.

First, a photo of Britannia Mill, where the collection is now housed. 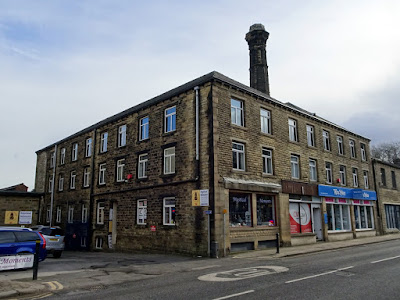 Like many other buildings in Slaithwaite, it is built from the local sandstone, and (as the name suggests) it was originally an industrial workplace.

Slaithwaite is in the Colne Valley, about 5 miles from Huddersfield.  The River Colne runs from Marsden, at the head of the valley, and on to Huddersfield and eventually joins the River Calder.  At Slaithwaite, it is not a very big river, only a few yards wide. 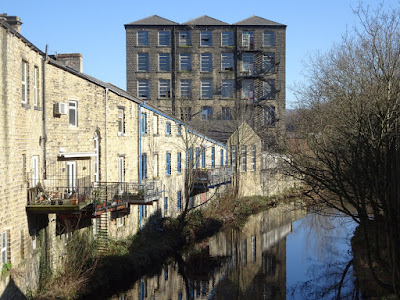 But in the distant past, it made a steep valley, and in the Industrial Revolution provided enough water power for mills to be established along the river.  There are several huge mill buildings remaining, like the one in the centre of the photo above.  Some have been converted to other uses, some are awaiting renovation, and a few are still used as mills.  The most notable example in Slaithwaite, for knitters, is Spa Mills,  the home of Stylecraft yarns and of Yarn Stories. Spa Mills, built in 1907,  is the huge building in the centre of the photo below.  (Notice the fine array of sheds in the foreground.)  The centre of Slaithwaite, including Britannia Mill, is off to the left of the photo, which also shows houses high up on the side of the valley opposite.  Historically, in this area, mills occupied the land in the valley bottoms, and the mill workers lived on the valley sides, which are often very steep. 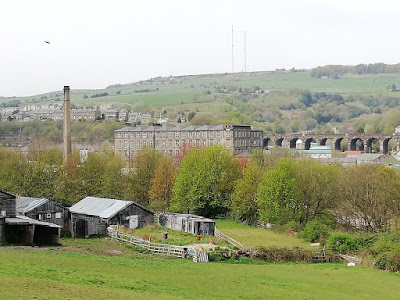 A few yards away from the River Colne in the centre of Slaithwaite is the Huddersfield Narrow Canal -  you can see how narrow it is in places from the photo below. 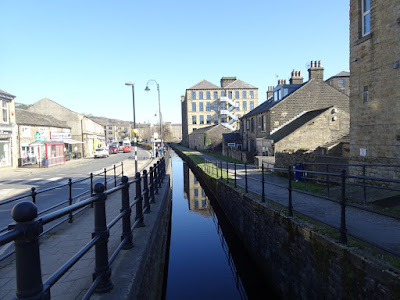 The canal runs from Huddersfield, up the Colne Valley to Marsden, where it goes under the summit of the Pennines by way of Standedge Tunnel, more than 3 miles (nearly 5 km.) long.  The canal continues to Ashton-under-Lyne where it links with the rest of the canal network.

The canal was built to transport goods, of course, and several of the Slaithwaite mills were built next to it, but its use for commercial traffic declined until it closed in 1944.  It was re-opened in 2001, and now it only sees leisure traffic. 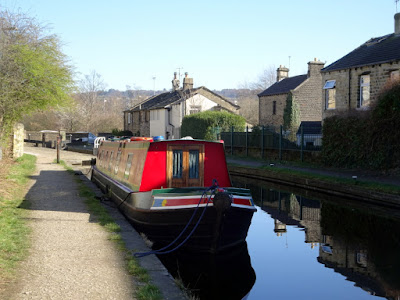 Here's another view the canal, showing one of the canal locks, and Spa Mills in the background. 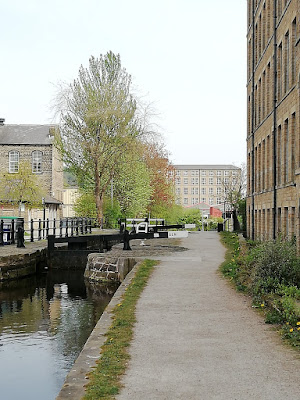 The re-opening of the canal has made a huge difference to Slaithwaite, I think.  There are many independent shops and cafes in the centre, a favourite being the Handmade Bakery and Cafe - it's alongside the canal and sells delicious bread, baked on site. 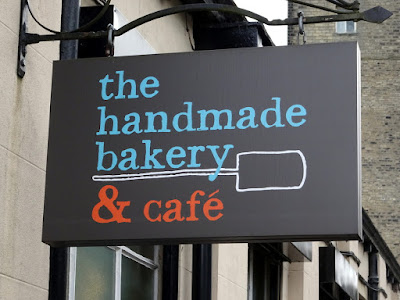 It's an exciting place to work.  I'm still exploring it - this week I found Spa Park, across the canal and river from Spa Mills.  Slaithwaite did at one time have a mineral spring whose water was claimed to be good for you (presumably the spring still exists somewhere, in fact) and a spa based on the spring.  The River Colne runs alongside Spa Park, looking very rural, although it is so close to the village centre.  According to an information board in the park, kingfishers can be seen on the river near there.  I hope that's true - I have never seen a kingfisher, so it would be thrilling to catch even a glimpse of one. I'll report back if I do. 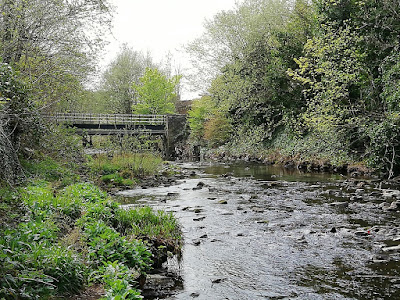 PS I forgot to mention that Slaithwaite has a train station.  The Colne Valley has been on several important cross-Pennine routes at various times, including the canal and the A62 Manchester-Leeds road (though that is now superseded by the M62). And the Manchester-Leeds railway line runs through Huddersfield, up the valley to Slaithwaite and Marsden.  There are trains from Slaithwaite to Manchester and Leeds, and from there connections to the rest of the rail network.  For most people, the collection is now more accessible than it was at our old site.

The railway line runs high above the centre of the village on a viaduct, visible in the first photo of Spa Mills.   Here's a photo of a train on the line, well above the Colne Valley Leisure Centre below. 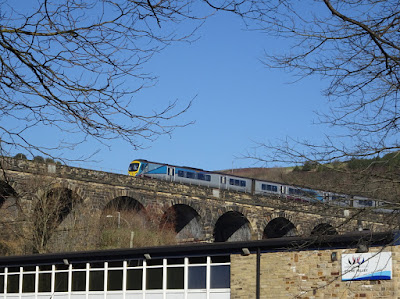