I have written a few posts about Fancy Needlework Illustrated, and an article in Piecework magazine that I wrote about here.  It's one of my favourite magazines in the Knitting & Crochet Guild collection, even though it emphasised crochet and embroidery at the expense of knitting.  It was associated with a consortium of cotton spinners, so everything in the magazine is about making things with cotton. It never published patterns for woolly jumpers, for instance (until Weldon's took over the magazine in 1937).  So when Fair Isle knits became popular in the 1920s, they didn't appear in Fancy Needlework Illustrated.  But I have seen the cover of issue 132 (below) many times while working on the collection, and the disembodied cardigan is clearly done in stranded knitting.   Inside, it is described as a Fair Isle design, though it is of course knitted in cotton.  I posted it on Instagram (tagged #fairislefriday) and decided to share it here too, where I can go into more detail.

The cover illustration of the cardigan shows the colours listed in the instructions - Dark Jade, Black, Ecru and Dark Tango (red, presumably).  The intro to the pattern says: "This lovely cardigan has been designed on the same lines as the well known and much admired Fair Isle Jumpers, which our Scotch friends are so expert at making.  In this case, however, the design has been very much simplified so that the most timid worker need not be afraid to attempt it.  Worked in bright colours of Ardern's Florentine Twist, it will answer many purposes — for skating, golf, etc."  (Ardern's was a cotton spinning company in Hazel Grove near Stockport.)   It doesn't look very much like a traditional Fair Isle, but it's very attractive.  The large buttons and the belt are the most obvious elements of 1930s style, I think, and it would be easier to wear today than most 1930s styles, because of its length - most sweaters of that era stop at the waist.  (Though it's only a size 32 in. (81cm.) so the pattern would have to be adapted to larger sizes these days.) 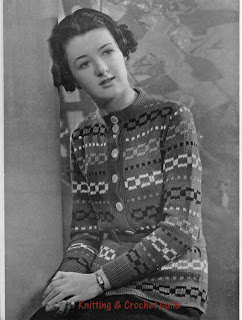 The other disembodied garment shown on the front cover is an embroidered gardening smock - completely impractical, unless you're picking flowers, or perhaps deadheading roses.  Nothing more strenuous than that.  As the cover suggests, there is rather a lot of embroidery in this issue.  Too much for me, certainly - I'm not a fan of embroidery if I'm expected to do it myself.

But there are more knitted and crocheted garments inside, including a nice knitted jumper with a buttoned front and a little collar.  It takes only 300g. of Ardern's Star Sylko size 5 (a mercerised cotton thread) - but then it only fits a size 34 in. bust (86cm.) and is only 17 in, (34cm.) long. 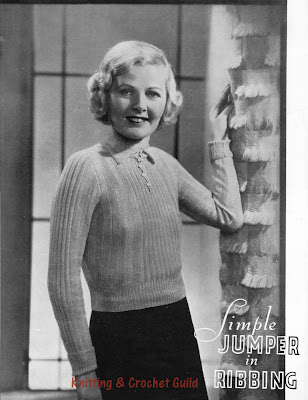 There's also a pattern for a crocheted collar and cuff set with a matching powder puff case.  "This collar and cuff set with be found invaluable for the business girl.  It will add a bright spot of colour to her smart business frock, and as it is made of Ardern's crochet cotton there will not be any accidents in the wash."  The colours suggested are Spring Green, Amber, Heliotrope and Sapphire, which would certainly be bright.  (I didn't know what colour Heliotrope is, but according to Wikipedia it's pink-purple.)  The stitches used are Rice Stitch and Solomon's Knots, which doesn't mean anything to me, but probably will to a crocheter. 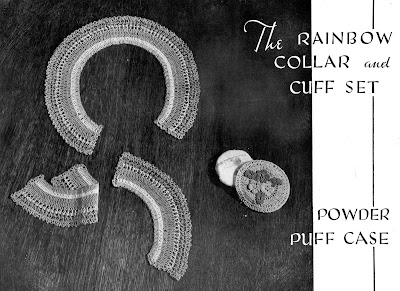 Finally, there is a pattern for "Foundation Garments in Crochet" - a "well-fitting set of suspender belt and brassière", also in Ardern's Star Sylko size 5.  To call it well-fitting is wishful thinking - the fit of the bra is entirely due to lengths of elastic, sewn to the bra to crossover at the back.  The crocheted part would only fit someone small enough not to need to wear a bra at all, it seems to me.  As for the suspender belt, the less said the better. 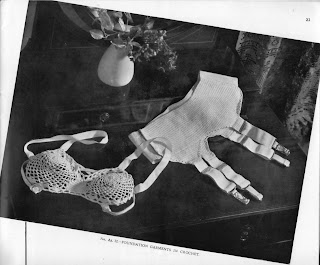