It's Tuesday and up to now (for the past few years) I have usually been at Lee Mills on a Tuesday, working on the Knitting & Crochet Guild collection.  But, as I've mentioned in an earlier post, the collection is moving.  The move is scheduled for next week, and everything is all packed up ready to go, so we are having this week off.  (Next week, on the other hand, is likely to be very busy.)

I've decided to use my unexpected free time to showcase the Patons pattern archive, which was given to the Guild a few years ago.  I have picked out a pattern from each of 50 years covered by the archive, starting in 1979 (because it's 40 years ago, a nice round number), and working backwards to 1930.  I'll post them over on Instagram (where I am @barbaraknitsagain), starting today with the 1979 pattern, also shown here:

The pattern describes it as "Casual good looks for this shawl-collared jacket in a sporty yarn.  Garter stitch ridges for an interesting background to the broken cables, and the shawl collar and edgings are in simple garter stitch."  It's knitted in Patons Capstan, "a rugged sports yarn, originally designed for Aran knitting, but now available in bold striking colours as well."  Still a good-looking jacket, I think.

Assigning dates to the patterns is sometimes a bit tricky.  The later 1970s pattern leaflets have copyright dates, so that's easy. Because we have the archive, we have the master copies, and in the 1960s and 1970s, those often have the date of issue written on.  In the 1950s, the company had a club for its customers, with a quarterly newsletter, Knitters Circle News, that usually mentioned a few of the latest leaflets. Otherwise, I have relied on ads in magazines - the magazines are dated, and I assume that companies would only advertise their newest patterns.

There are two periods when it's been particularly difficult to find a representative leaflet for a year.  The first is during World War 2, when for several years Patons did not advertise their leaflets.  They may have produced catalogues for yarn shops, but if so, we don't have any in the collection.  So assigning a year of publication involves some guesswork. The other is in the early 1930s, when there are gaps in the archive.  The earliest leaflet in the archive is number 170, published in the late 1920s.  (The company was then called Patons & Baldwins - it had been formed by a merger of Patons of Alloa and Baldwins of Halifax in 1920.)

The leaflets numbered 211 to 290 are missing from the archive, and these may include the leaflets published in 1930.  So my choice to represent that year may have actually been published in 1929 - apologies in advance.

But I hope that Instagram users who like vintage knitting patterns will enjoy seeing the changing styles as we go back in time from 1979.  If it proves popular, I might repeat the exercise, maybe with patterns for men or children.

And as I've said before, members of the Knitting & Crochet Guild can have copies of vintage Patons patterns, for personal use, on request - just email collections@kcguild.org.uk.
Posted by Barbara at 13:20 4 comments: 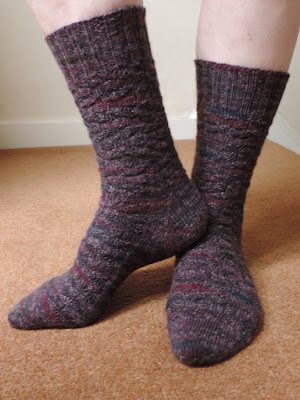 I have been knitting a pair of socks for my sister - just finished them.  My New Year's knitting resolution was to knit both socks of a pair at the same time (to avoid mismatches, not to mention second sock syndrome), starting with this pair.  I tried knitting with two circular needles, but found it too awkward - too much cable to contend with - and so used magic loop with a single circular needle instead.

The yarn is Regia Graphics Color sock wool.  My sister wanted a pair of socks to wear with her Joules printed rubber ankle boots - I haven't seen them, but here is the matching handbag. 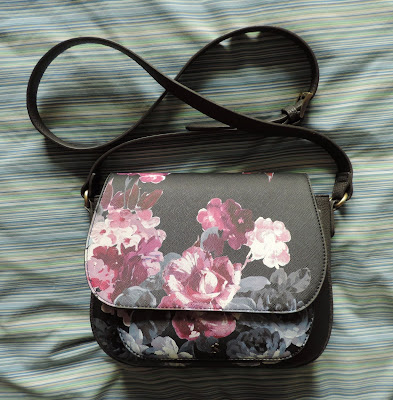 I think the yarn is a pretty good match to the colours in the handbag, especially as I didn't go looking for it, but found it more or less by accident - after my knitting friend Cath Harris died, her family had a coffee morning in aid of the charity Myeloma UK to find homes for some of her extensive stash of wool and other craft materials, and I found it there.

I knitted the socks toe-up, using the same basic construction (German short-row heel, with a gusset) that I have been using recently, because I know it fits me very well. It turns out that my socks fit my sister very well too.

I didn't want to use a complicated design with this variegated yarn, so I chose the Vandyke Check stitch pattern from Barbara Walker's A Treasury of Knitting Patterns.  I have used it before - for the first pair of toe-up socks I ever knitted, made for my daughter in 2011. 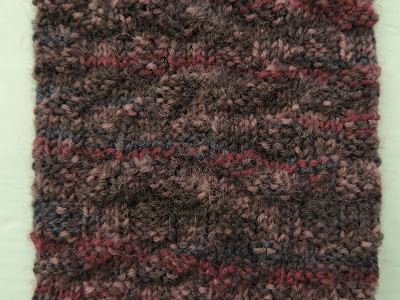 The pattern really doesn't show up very well, but I do like the texture given by the blocks of knit and purl stitches, so I'm happy with the choice.

I hope you enjoy wearing your socks, Margaret.  I have enough yarn left to knit a pair of socks for me, too, but I think I'll have a break from socks for a while.
Posted by Barbara at 12:53 No comments: