Last weekend, I was knitting at Sheringham, on the north Norfolk coast - the Leighton Buzzard branch of the Knitting & Crochet Guild hold an annual weekend at the Youth Hostel there.  A busy weekend, with a yarn swap, a quiz, talks and workshops.  Alongside the workshops, I did a couple of sessions on tools and gadgets from the Guild collection which were innovations in their time, and have a patent number attached - such as the Double Century needles.  I took a few knitting patterns with patent numbers too. (You might not think that you could patent a sock pattern, but it has been done - I'll write about it some time.)  There was time to look around Sheringham and visit the shops, including the two yarn shops.  And of course a lot of knitting was done (or crochet, for those that are that way inclined).

During the weekend, a Guild member gave me some pattern leaflets and booklets from a friend of hers, as a donation to the collection - a mix of styles and dates, from the 1930s to the 1970s or 80s.  It's exciting to look through the very old patterns - there's often something fascinating that we don't already have in the collection.

The two oldest patterns in the new donation are Scotch Wool & Hosiery Stores leaflets from the early 1930s. Their leaflets at that time were 'given free' - presumably if you bought the wool.   The first is for a 'Gentleman's Pullover', with or without sleeves.   It has a band of stranded knitting above the welt, and another around the V neck - in a rather boring colour combination of brown on fawn.


The other is a children's pattern, size 24 in. (61 cm.) chest. There is a boy's pullover, with a V neck, and a girl's pullover with a square neck, buttoned on the shoulder.

We have some of the Scotch Wool Stores pattern leaflets from the 1930s in the collection already, but there are a lot of gaps, so it's good to be able to fill in two of them.

I'll show a few of the later leaflets too.  From the 1950s is this elegant double-breasted jacket.


It's aimed at teenagers - the girls on the cover are evidently fans of jazz and the Beatles. There was a time in the 1960s when every teenage girl wanted a ribbed sleeveless sweater with a polo neck, just like the one here.

And representing the 1970s is a 'poncho style shawl', crocheted in dishcloth cotton.


Some very nice additions to the collection.  I bought another myself, in the Salvation Army shop - a Bestway pattern from the 1940s that I thought we didn't already have, and I was right.  (I could actually have checked the list of Bestway patterns in the collection on my phone, but it's more fun to wing it, and see if I'm right later.)  And a pair of Barnet knitting needles in a junk shop - not a make I had heard of.


I mentioned that there was plenty of time during the weekend for knitting and crochet.  I was knitting a pair of socks for my sister - both socks at once, in line with my New Year's knitting resolution. They are progressing nicely - this is how much I had done by Sunday evening: 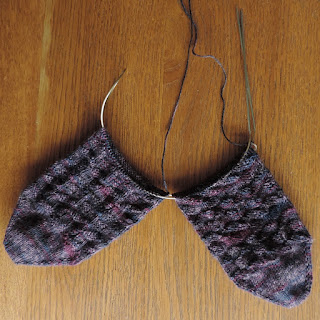 It was a very good weekend - and Sheringham 2020 is already planned.