It's very exciting (as I think I've said before) when we identify the pattern that was used to make an item in the Knitting & Crochet Guild collection.  I talked in a recent post about how important it is to have a story to tell about an item of knitting or crochet - the pattern it was made from (if there was one) is a crucial piece of its story.

The 1950s jumper below is one of many items in the collection that were the work of one woman, Jane Denny.  She was a prolific knitter - she commuted to work in London by train, and knitted on the journey.  She eventually gave the Guild more than 50 garments.  The earliest is a pixie hood that she probably wore to go to school in the 1940s, but there are also several little jumpers that she knitted in the 1950s, and later garments too. 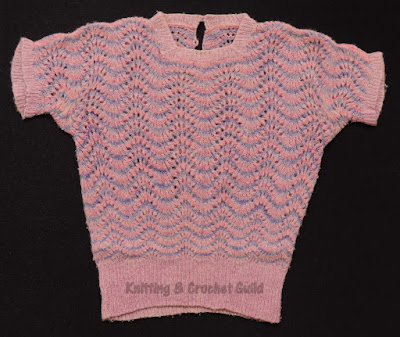 We have three feather-and-fan jumpers knitted by Jane Denny in the collection - it was evidently a stitch pattern that she liked very much.  As you can see, it has a buttoned opening at the back of the neck (one of the buttons is missing), which was common in 1950s jumpers. This one is distinctive in having a square neck and dolman sleeves, and those features match it to a Marriner's pattern.

I like the square neck opening - a neat way of avoiding having to incorporate a curved line of decreases into feather-and-fan.  There is of course a seam along the shoulders, running into the sleeves, and an underarm seam.  It's awkward to seam the wavy edges of feather-and-fan neatly, but I think that the seams would look better when worn (as in the illustration on the pattern leaflet) than when laid out flat.

Marriner patterns at that time included a sketch of the garment as well as a photo, to give you an image to aspire to.  Wearing gloves, earrings and flowers on your shoulder is easily achievable, if a bit impractical for everyday wear, the hourglass figure not really. The obvious difference from the Marriner pattern is that Jane Denny's jumper is striped, in two shades of pink and a blue-purple. 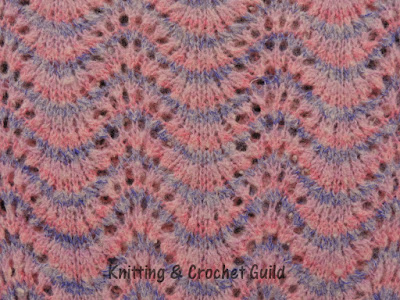 Most knitters, I'm told, like to match the illustration on the pattern leaflet as closely as possible, and choose the same colour.  (I've done that myself.)  It's a very useful habit, as far as the collection is concerned -  it helps in matching a finished garment to its pattern. For instance, the pink crocheted disco dress (see here) was easy to recognise because the pattern leaflet also shows the dress in pink.   But Jane Denny not only chose a different colour, but also knitted her jumper in stripes.

One of the earliest cases where I matched a garment in the collection to its pattern was also a Jane Denny jumper, knitted to a Jaeger pattern.  I wrote about it here. 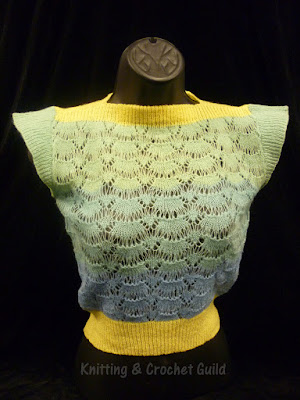 It was knitted to a Jaeger pattern, and again it was designed to be knitted in one colour.  But Jane Denny knitted it in broad bands of four different colours, combining together beautifully. We already knew quite a lot about her, and we know from the quality of the garments she gave to the collection that she was a skilful knitter.  We can now see, comparing these two jumpers with their patterns,  that she also had a very good eye for putting colours together, and didn't just follow the intention of the pattern designer.
Posted by Barbara at 10:59