The first weekend of Heritage Open Days has just ended, and it's a great opportunity to see places that are not normally open.  Yesterday we went to see the church at Ripponden, not far from here in Calderdale.  It's mainly 19th century, but has a medieval window, surviving from an earlier church on the site, that was restored by the York Glaziers Trust in the 1970s.

Next to the church is a packhorse bridge leading into the centre of the village. The other side looks very rural, with the River Ryburn running alongside the churchyard, in a wooded valley.  It wasn't a good day to appreciate the surroundings though - grey and rainy, and not very warm.

Some interesting documents had been put on display for the occasion - registers, minute books, programmes for the unveiling of the First World War memorial, and so on.  One  of them was a booklet of recipes contributed by women of the parish in 1933 to raise funds.  They mostly seemed to be cake and biscuit recipes, but I was intrigued by one for 'Strengthening Tonic'.

5 lemons, 5 eggs. Put the eggs whole into the lemon juice for 5 days.
Then beat them up with ½ lb. brown sugar, 1 gill rum, 1 gill of cream (or new milk), and strain.
One wineglass to be taken between meals.

A gill is a quarter of a pint, or 5 fluid ounces (in the U.K. - British pints are larger than American pints).  That's about 140 ml.  I'm not sure of the point of steeping the eggs in the lemon juice for 5 days.  Would that help to preserve them?    It sounds a bit like the Dutch advocaat (my Grandma's favourite tipple at Christmas) but that doesn't include lemon, and I think advocaat has more alcohol. It sounds as though it should taste good - I like the idea of drinking something delicious because it's good for you.  If anyone feels inclined to try it, I'd love to know how it turns out.

We were also in Ripponden a week ago, when we walked from Ripponden up the Ryburn valley, round the Ryburn reservoir and back again.  It was a warm and sunny day then, and we enjoyed our walk.  It also happened to coincide with the Sowerby Bridge Rushbearing Festival, when a tall cart laden with rushes (originally to strew on the floor of the church) is pulled around the area by a team of men, with a young woman seated on the top of the cart.  Over the course of the weekend, the cart visits several churches and (very important) several pubs, and ending up on Sunday afternoon at the church in Ripponden. The rushcart arrived at Ripponden not long after we got back from our walk, so we had a good view of the final stretch when the men run with the cart down the slope from the main road and through a 90 degree turn into the area in front of the church.  (If that sounds alarming, it looked it.)

At the point where they need to turn towards the church, the man at the front puts his right arm out to signal that this is where they should turn left.  (That sounds wrong, but I suppose he is indicating that each pole (with a pair of men) behind him should turn at that angle at that point. Maybe.) 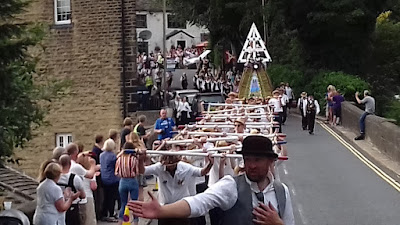 Here's the first pair of men just starting the turn. 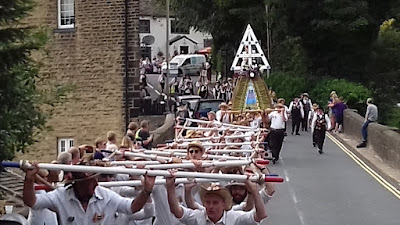 And here's the rushcart as it goes down the slope towards the church, with  the young woman perched on top of the rushes. 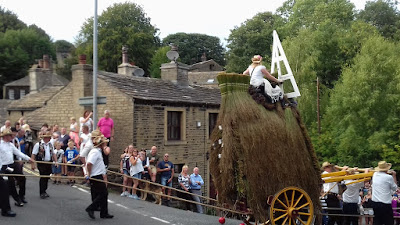 A lot of people had turned up to watch, there were various stalls outside the church, and a fair amount of beer being drunk.  There were Morris men and mummers accompanying the cart, and a good time was had by all.  (Though we didn't stay for the Morris dancing and mummers, but left for the pub up the road.)
Posted by Barbara at 17:19