James Norbury in Woman's Own

A couple of weeks ago, I went to a book fair with John.  On one of the stalls, there was a pile of Woman and Woman's Own magazines from the 1950s, in good condition, not expensive.  I bought several of them - selecting ones with interesting knitting, of course.

Two of the Woman's Own magazines, from 1955, advertised knitting patterns by James Norbury on the front cover.  James Norbury was then the chief designer for Patons, but the main draw for Woman's Own readers, I'm sure, was that he had a TV series on knitting.

In one of the magazines I bought, from January 1955, there is a double-page spread with the heading "Famous T.V. knitting expert James Norbury joins Woman's Own" - evidently intended to be the first of a series of features.

The two patterns in this issue are billed as "To wear at the weekend".   Both are (of course) knitted in Patons wools - the man's is in 4-ply (sport weight?), and the woman's in 2-ply (super-fine?).  The black and white photo of the man's dolman-sleeved pullover doesn't really show it adequately - it is knitted in black and grey, mainly, but uses oddments of four other colours - suggested are green, scarlet, white and royal.  The colours are used in the band from cuff to cuff; the fancy pattern at the lower edge of the band is in green on black, and then there are stripes of red and white, with three rows of stranded knitting in white and blue sandwiched between the bands of stripes.  I'm having trouble visualising that - it sounds much too busy to me. 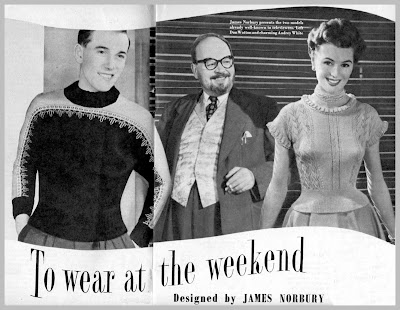 And then there's the woman's jumper - just right "for the girl with the 'what shall I wear when  my guests come tonight' problem", it claims.  (Though frankly, if that's your problem, it's a bit late to start knitting a jumper in 2-ply.)

In its favour, it has two wide bands of my favourite print o' the wave/leaf and trellis pattern back and front.  Apart from that I think there's far too much going on - there's a different stitch pattern up the centre, and the frills round the sleeves and neckline are too fussy.   And her waist is ridiculously tiny!  Though actually I think it's partly that her skirt has stiff petticoats underneath to puff it out. 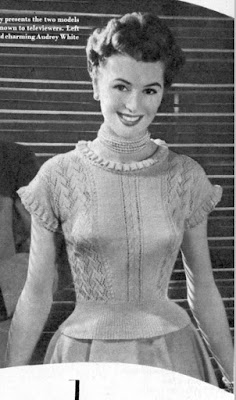 You can see from the photo that there's a lot of shaping above the welt.  There's also shaping in the rib, to accommodate the width of the skirt - the rib is first knitted on size 11 (3mm.) needles and then on size 13s (2.25mm.)

I think the whole jumper is awful - and such a waste of effort to knit something so complicated in such fine yarn.  But I'm quite prepared to believe that some people will like it.

Another of the magazines from the book fair was a Woman's Own from later in 1955, with three more James Norbury patterns.  Designs for women, all using lacy stitch patterns.

The first is a dress, which takes 24 oz. of 3-ply wool (somewhere between fine and super-fine?) and a huge amount of time, I'm sure.  The description says "An insertion of lace stitch between bands of knit 1, purl 3 rib (the knit stitch is worked through back of loop) forms the skirt of the dress.  It is shaped at the waist and has a panel of lace stitch on the bodice."  It looks quite pretty, though it would be hugely impractical for anything more energetic than watering house-plants, which is what the model appears to be doing.

Then there's a lacy cardigan, also in 3-ply, which I think is very attractive.  The magazine says "this charming cardigan is right for any informal occasion".  (But obviously not so informal that you'd leave off your pearl necklace.)  I like the combination of a fancy rib gradually evolving into a lacy pattern on the fronts and back. 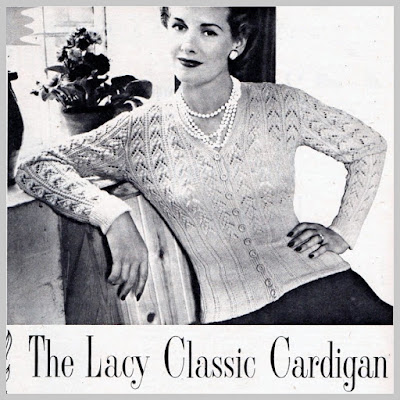 Finally, there's a relatively thick knit, in 4-ply, for "autumn's chilly days".   It's described as a tunic-jacket.  The panels on the front, with a pattern of trailing leaves, are knitted on the bias; that's what the introduction says, though I must confess I can't figure out from the (very complicated) instructions how that's done.   An interesting idea, though. 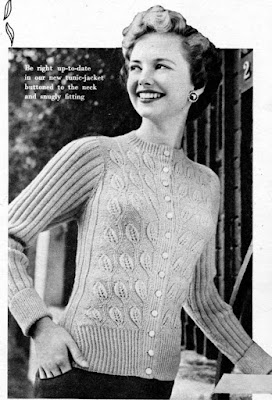 James Norbury wasn't short of inventive ideas (even if he sometimes went over the top in putting too many of them into the same garment).  And I assume he had people to knit for him, so he didn't have any problem with designing a dress with a full skirt in a complicated pattern in 3-ply wool.

Apart from the knitting patterns, there's a lot in the magazines that is absolutely fascinating - it was such a different world.  I was struck particularly by the distressing number of corset ads - you don't get a tiny waist like the model in the first magazine just by will-power and breathing in.

The descriptions make them sound like a feat of engineering, which I suppose they were, in a way. A typical description is the Kayser Bondor "new all nylon net girdle with wonderful boneless control in criss-cross reinforcements".  That was made in sizes 24-30 in. waist (61-76cm.), so they weren't aimed at the overweight.  The emphasis is on control rather than comfort - though I imagine that the introduction of nylon and better elastication did make them more comfortable than earlier corsets.  Still gruesome though.