In the current issue of The Knitter (number 127),  Emma Vining writes about an ebook produced for the Knitting & Crochet Guild's 40th anniversary this year.  The six designs in A Knitter's Journey are inspired by the enormously long sampler in the Guild's collection, knitted by Gladys Jeskins - the sampler is made up of around 900 stitch patterns, and is about 50m. long.

For the book, Emma, Tricia Basham and Juliet Bernard have designed accessories (scarves, hats, mitts,...) based on stitch patterns in the sampler.  Emma describes in her Knitter article how she developed her designs, a scarf and a shawl,  from  one of the sampler stitch patterns.

The project to make use of the sampler has been in progress for a while - in 2016, volunteer Guild members re-knitted some of the stitch patterns as separate squares. Here's one of the two that I contributed.  (I wrote a post about knitting the squares here.) 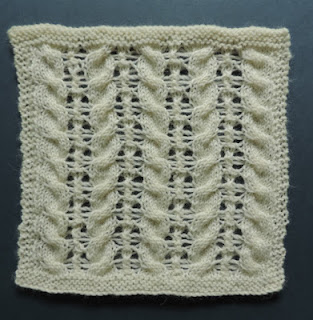 The squares were on display at the Guild convention at the beginning of July - it was fascinating to see them all together and not just my two.  The sample knits for A Knitter's Journey were also on display - knitted in ruby-red yarn, as appropriate for the 40th anniversary.

And the sampler itself was also on show.  It's now kept on a garden hose reel, so that it's relatively easy to unwind and rewind. At one of the sessions, when we were all (about 80 of us) sitting in rows, the sampler was unwound and the end was passed from person to person until everyone had a stretch of the sampler in front of them.  Even then, some of the sampler was still on the reel.

It was extraordinary to see so many different stitch patterns going past (and I was sitting towards the back, so I only saw about 200 of them).  Most of them are quite complex - Gladys didn't bother with straightforward stitch patterns like moss stitch or rib, because she seems to have been exploring stitch patterns that she didn't already know. It made me realise again the infinite possibilities of knitting.

I saw so many interesting stitch patterns, but one in particular caught my eye, because I don't recall seeing anything like it.   I remembered its number (there are now numbered swing tags attached to the sampler every 5 stitch patterns), and asked for the instructions later.   I have knitted a swatch, first following the instructions exactly, and then modifying it.  Here's the result after the changes. 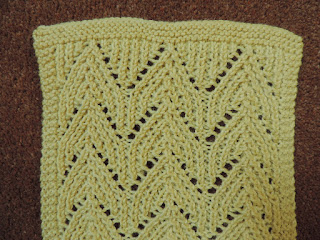 I think it will make a very nice scarf - my sister has already placed an order.  There are so many possibilities to be explored in the sampler - I'm sure Gladys Jeskins would have been delighted to see it being used as a source of inspiration.  And for Guild members, the ebook of A Knitter's Journey is available free from the members' area of the KCG website.