My friends Ann Kingstone and her sister Marie ran a Yorkshire Knitting Tour last week (finishing today). It was based at Parcevall Hall in upper Wharfedale - a 17th century manor house, extended in the 1920s, when a terraced garden was made.


On Friday, I went there with a suitcase of 19th century knitted lace from the Knitting & Crochet Guild collection, to show to the knitters as an introduction to two days of lace knitting workshops that Ann was going to teach.

A couple of the things I took to show the knitters have already appeared on this blog, like a pin-cushion cover in print o' the wave stitch (or leaf and trellis, as Victorian knitters would have called it).   Here's a small selection of the other things I had in the case.

I showed another knitted lace pin-cushion cover, this one with its pad inside.  It's suffered some damage from the pins and has been mended, possibly in Victorian times. 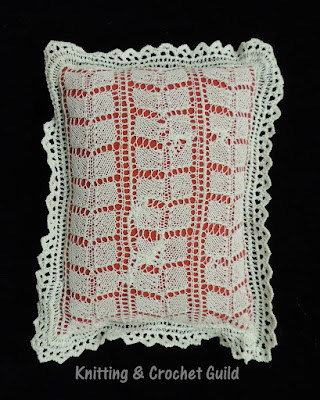 Two Victorian knitted samplers had been specially requested, and caused a lot of interest. As did Captain Tweedie's splendid nightcap. 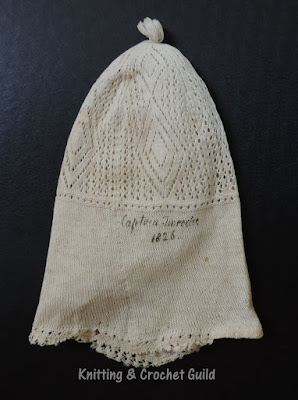 Many of the Victorian pieces in the collection are mats, covers or doileys of various kinds, including this very finely knitted mat. 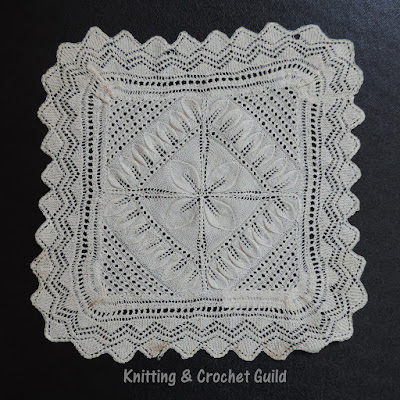 The basic design, with a sort of four-petalled flower in the centre, is very common, but there are many variations.  It is often used for bedspreads, made up of lots of squares knitted in thick cotton - it isn't usual to see it knitted in very fine cotton.

I had time for a walk around part of the garden, which is open to the public.  And it rained!  (Rain doesn't normally merit an exclamation mark in a British summer, but this year, it hasn't rained for weeks.)  The hillside across the valley was covered in cloud - though the fields were yellow-brown when they should have been green, because it has been so dry. 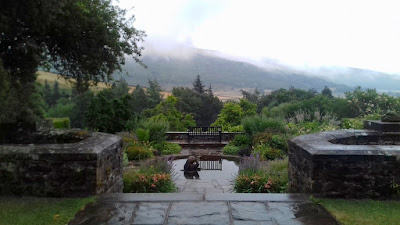 The garden is a series of terraces stepping down the slope, with wide views across the valley.  But looking along a terrace gives a much more enclosed feeling. 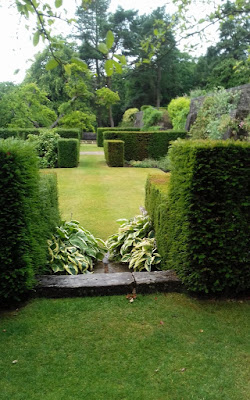 At the back, part of the building was built directly on top of a huge lump of exposed bedrock - which then had a rock garden planted in it. 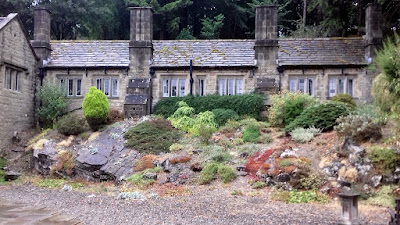 An interesting house, and a beautiful garden - and evidently an ideal place for a week's knitting holiday. The knitters were very enthusiastic, and keen to examine the things I had brought.  It's great to be able to show pieces from the collection to an appreciative audience, and I really enjoyed joining the knitting tour for half a day.  Ann and Marie are planning to run it again next year, so hopefully I will be back.
Posted by Barbara at 09:23