Last weekend, I was at the Knitting & Crochet Guild's annual convention, this year at the University of Warwick.

2018 is the Guild's 40th anniversary, so of course we had a birthday cake. 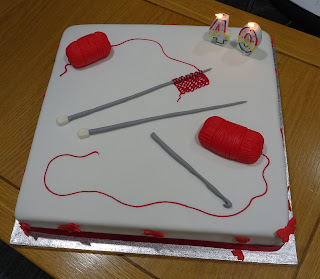 Because of the anniversary it was a very special convention. Sasha Kagan, who is one of the Guild's patrons, gave the keynote speech.  Another speaker was Pauline Turner, a founder member of the Guild, a pioneer of crochet, and the 2018 inductee into the Crochet Guild of America Hall of Fame.

We had half-day workshops on Saturday and Sunday, led by Guild members.  Another of our patrons, Debbie Abrahams, taught a workshop on finishing techniques.  I didn't manage to get to that - there were a lot of enticing workshops on offer.  On Saturday, I did a workshop on making a tiny version of Elizabeth Zimmerman's baby surprise jacket, either crocheted or knitted.  The idea was that after trying it out on a small scale, we would be able to make a bigger one, maybe with some variations. Here are the ones we made in the workshop - mine is the one at the bottom. 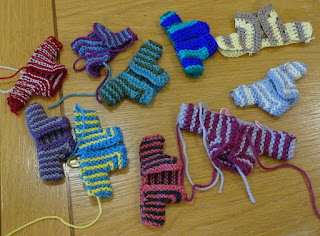 The workshop I went to on Sunday was on Estonian colour work knitting, taught by Rachel Lemon. Here is the sample I knitted (finished off on the train home, so if I got anything wrong at that point, it's because Rachel wasn't on hand to consult). 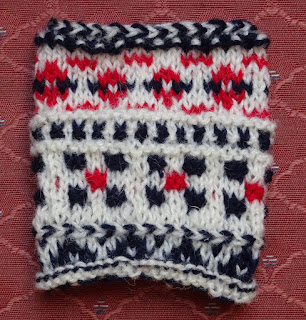 It was fascinating - very unlike other stranded knitting I have tried, because it has a lot of texture from using purl stitches.  The bands of stranded knitting are separated by braids, too (narrow raised bands of knitting) - I was particularly intrigued by the vikkel braid, which is the band of navy and white arrowheads pointing to the right, towards the bottom.  Difficult to grasp at first, but OK with some help.  Impossible to imagine how anyone could invent it.

My  workshop knitting was sort of intended to be one of a pair of cuffs or wristlets, but it's not good enough for that - it's just a practice piece. (Also, it's very difficult to get my hand through, which is rather a disadvantage for a cuff.)  I do intend to explore Estonian knitting further though.

Kaffe Fassett is also a patron of the Guild, and although he wasn't available, he did send a lovely stole knitted in Kid Silk Haze, to be raffled.  And on Friday, before the start of the convention proper, Brandon Mably taught a one day workshop on using colour.  I attended it and it was amazing - I've never been very adventurous about putting colours together, and the workshop led me to look at combining colours in a different way.  Brandon showed me that startling colour mixes can sometimes work very well, and may not appear at all startling from a short distance.  And sticking to 'tasteful' and safe colour combinations risks looking just dull.

Here's the swatch I knitted in the workshop: 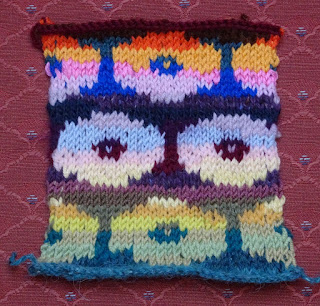 The first poppy, at the bottom, seems a mix of soft yellows and greens, but in fact one of the yellows, picked by Brandon from my neighbour's collection of wools, is a really bright lime yellow. In the mix with the other colours, though, it perks them up without being overwhelming.  Further up, there's a bright blue among the dark shades that has a similar effect.

Here are the swatches that the workshop participants knitted during the day, still on the needles at the end of the workshop. (Mine is the one at the top left.) It was wonderful to see the beautiful results that everyone produced. 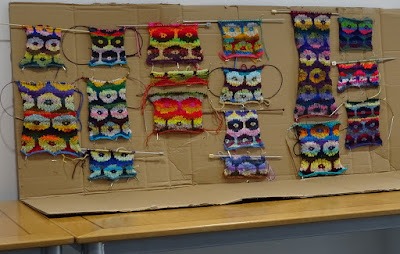 This is an approach to using colours that I really want to explore more - it feels so exciting. Unfortunately, as a side-effect, it did also make me feel like buying lots of different colours of wool, immediately.  So I'm not quite sure yet how to proceed.  Because I don't need more wool.
Posted by Barbara at 21:59