Last week, we returned to them and sorted through a crate of mostly grey needles - mostly enamelled metal, some plastic.  A lot were the very common Aero and Milward needles, but occasionally there were other brands in the crate, so we were picking those out.  We are disposing of all the duplicates, but we found several dozen pairs that should go in the collection.

Some of them were branded with the names of spinners that I know from pattern leaflets - Copley, Vyella, Don Maid, Jester, Cronit.  They are mostly represented by just one pair of needles, but a couple are more common:  Robin (and Robinoid),  and Beehive Brand (Patons & Baldwins).


There are a lot more brands that I never heard of before - and to be honest, they are are pretty similar grey enamelled metal needles, with only the brand name to distinguish them: Bienna, Ibex, Fearnside, Poppy, Pixilite, Bouquet, ....


One name I knew already is Stratnoid: in the 1920s, Stratnoid needles were made of duralumin, an aluminium/manganese alloy.  They are very nice to knit with - light and strong.  And shiny, a pleasant change from grey. But last week, I found needles of a much later Stratnoid design, which are the usual grey enamel, sadly.


But at least this design is different from most of the others because I can approximately date it, from an ad in 1968. 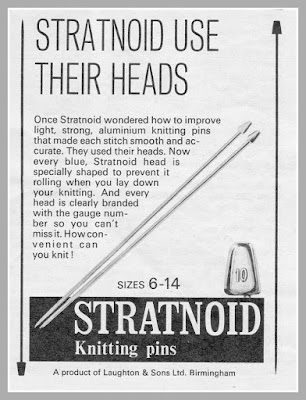 We have now worked through all the assorted metal needles.  A lot (the duplicates) will be re-homed, and we have expanded the knitting needle collection with the rest.

All week, I was hoping to find a knitting needle brand not listed in Susan Webster's mammoth list of knitting needle brands, that you'll find here.  But whenever I looked in her list for some strange name I had never heard of, I found that Susan was there before me.  With just two possible exceptions: AKE and Vulcan. But I quite expect to find that they are just variations of brands that she already knows....