Fluffier on the inside

On Thursday evening, we had the December meeting of the Huddersfield Knitting & Crochet Guild branch.  Our theme for 2017 has been Yarn, in all sorts of forms.  To finish the year we had a workshop from one of our members, Sarah Alderson of Aldersign Designs.  The workshop was on thrumming - a traditional technique from Canada for making very warm mittens and such like by knitting extra bits of unspun wool into them to make a fleecy lining.  (Search for 'thrummed mittens' to find some YouTube videos and articles - here's one by the Yarn Harlot.)

Sarah provided us with undyed wool tops to make the thrums - short lengths of roving folded into figure-of-eight loops.  And she had designed a pattern for thrummed slippers / bootees - the design is called 'Fluffier on the Inside'.   The sole of the slipper is thrummed, and there is another band of thrumming around the ankle.  Sarah's prototype was in dark blue, and looks a little bit like Doctor Who's Tardis (which of course is bigger on the inside).

We started with a slipper sole, and I finished mine on Thursday evening.  The photos show the outside, with a neat pattern like the lice in Norwegian knitting: 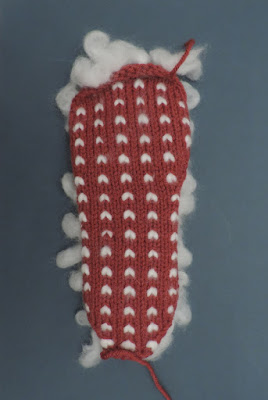 and the inside, which looks like an explosion in a wool warehouse: 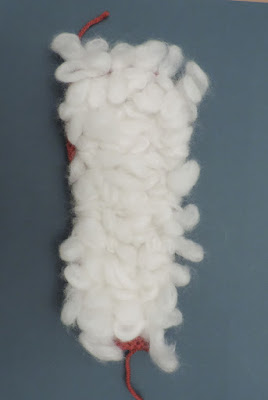 Sarah says that after the slippers have been worn for a while, the thrums felt together into an even, very warm layer.

The next step in making the slippers is to pick up stitches around the edge of the sole to knit the upper (which isn't thrummed).   Before doing that, I think I should knit the sole again - the size needs some adjustment.  And before that,  I need to finish off some Christmas knitting - there's not much time left, but it may just be done by Christmas morning.  But I shall definitely finish the slippers - they will be so cosy.
Posted by Barbara at 18:04