When we were in London a week ago, for the Knitting History Forum, I spent a happy day at the British Library, looking at magazines from 1918. I was gathering material for my blog about the First World War, One Hundred Years Ago. It's been through a very thin patch since I broke my wrists last year, and I almost decided not to add any more posts, but then I thought that I should at least post the material I had already collected, and now I'm planning to revive it and keep it going. The war won't last much longer, after all.  (I'm sure that's what people hoped in 1917, too.)

So I ordered Woman's Weekly, Home Chat and Home Notes for 1918.  They were all weekly magazines for women, and all survived until the 1950s - Woman's Weekly is still with us, of course.  Woman's Weekly was a good read (though of course I didn't have time to properly read very much of it).  There was lots of interesting material about how to train for some of the new job opportunities available to women.  Mary Marryat, who still nominally wrote the advice column in the 1950s (but I'm sure wasn't the same woman - if indeed she ever existed) was issuing good advice to young women getting into relationships with men in the armed forces.  (Some of it extremely practical - e.g. you can tell from his pay-book if he's already married.)  And Cecile, who I think also survived as the Woman's Weekly cookery writer until the 1950s, provided recipes and meal plans for the meagre rations.

And as I was looking through the issues of the magazine, week by week, I saw a pattern I recognised.


The 23rd March issue has an illustration of a tea cosy on the cover - and I recognised it, because there is a tea cosy made to the same pattern in the Knitting & Crochet Guild collection.   (Strictly speaking, it's a tea cosy cover, not a tea cosy -  it wouldn't do anything to keep a pot of tea warm by itself.) 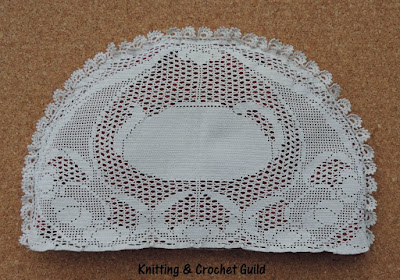 The cosy in the collection is identical to the Woman's Weekly illustration, except that our example has a decorative frill around the edge - but the pattern just says that when you have made the two halves of the cosy, you should finish off "with any little edging round the top".

I probably wouldn't recognise all the filet crochet tea cosies in the collection, but I know this one, because of its other side.  I'm sure that the designer intended that both sides of the cosy should be the same, but the maker of ours used different designs.  The other side has a "VICTORIOUS PEACE 1914-1919" design, and it's very familiar because I show an illustration of it in my talk on knitting & crochet in World War I. 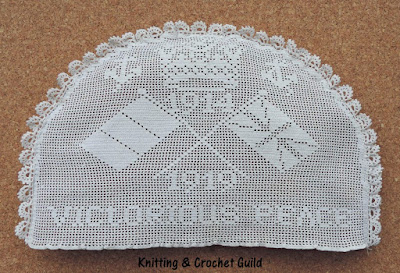 It was surprising and exciting to recognise an image from 1918 so unexpectedly.  Next time I visit the British Library, I'll look through Woman's Weekly for 1919, to see if our maker found the 'Victorious Peace' design there too.

I'm afraid that Home Chat and Home Notes were nowhere near as interesting as Woman's Weekly - Home Notes in particular was very dull.  Clearly, enough readers went on buying them to keep them both going for another 40 years, but personally I'd have bought Woman's Weekly instead.
Posted by Barbara at 17:40