But then recently I saw that we had some black double-pointed needles, that I thought might be vulcanite.  Another name for vulcanite is ebonite, and it was used to make jewellery and other decorative pieces in imitation of ebony or jet - black is its 'natural' colour.

The needles that I thought might be vulcanite are size 14 (2mm.) and some are in a set of four with a paper band around them, though it's not very informative - it just says 14 W.G. (presumably for 'Wire Gauge') and Made in England. 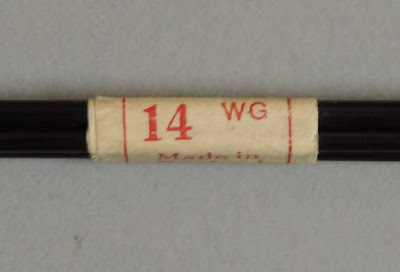 You can test whether a knitting needle is vulcanite by rubbing it gently to warm it - it should smell of rubber. I've done that and they do smell of rubber - at least to me. I've asked several other people to test them, without mentioning rubber.  No-one else said that they smelt of rubber, and you would be amazed at the range of things that various people thought they could smell.   (Strawberries?!!)

So I'm relying on  my own nose.  Also, they are surprisingly sharp, which makes me think that they are not made of one of the usual plastics.

And this week we have been given some more knitting needles, including a pair of black straight needles, 12 in. (30.5 cm.) long and size 7 (4.5 mm.)   They don't have any label or markings on them, not even the size.

Again, they are sharper than most plastic needles.  And to me, they smell of rubber.  So I'm convinced they are vulcanite, and I'm not asking anyone else to smell them for me.