A friend sent me a package of pattern booklets and leaflets this week, a donation for the Knitting & Crochet Guild collection.  She lives in Scotland and had found them in her local charity shop - several of them do in fact have a Scottish flavour.  There are several 1950s pattern booklets that were given away free with The People's Friend magazine (published in Dundee).

There were several late 1940s pattern leaflets in the package too, including this lacy blouse pattern with crocheted buttons. (I'd call it a blouse, or else a short-sleeved cardigan.  The leaflet calls it a 'jackette'.) 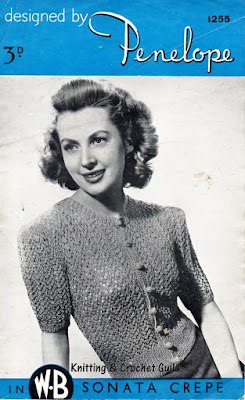 The most intriguing item was a copy of the Scotch Wool & Hosiery Stores' Hand Book of Knitting and Crocheting. which was similar to Patons & Baldwins' Woolcraft.  It gave a lot of useful basic patterns, with an emphasis on underwear. 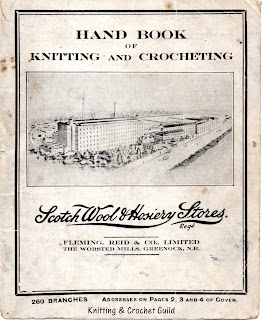 I think this edition dates from the First World War - it has several patterns for balaclava helmets, steering gloves, puttees, and similar garments that would be useful for soldiers and sailors. But the intriguing thing is not the booklet itself, but its cover - the original cover (above) is falling apart, and a new cover has been made from the outside of a school exercise book.  (To confirm that, it has the address on the back:  Corporation Printing and Stationery Department, 197 Pollokshaws Road, Glasgow, S.1. ) 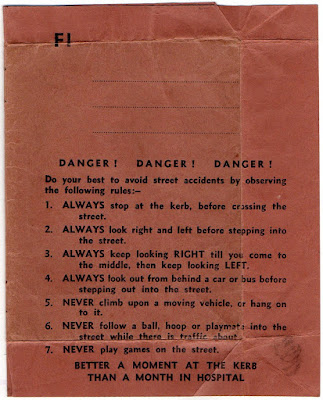 And on the front is advice to children on how to cross the road safely.

BETTER A MOMENT AT THE KERB
THAN A MONTH IN HOSPITAL

What I want to know is: when did children last play with hoops?  (i.e. hoops for rolling along the street, not new-fangled things like hula-hoops).  Long before my time, I'm sure.  There's a long article on hoop rolling in Wikipedia, which shows that it has a very long history, but it doesn't say when it stopped being a common street activity for children.

The cover should clearly stay with the booklet - even though  it's nothing to do with knitting or crochet, it's now part of the booklet's history.
Posted by Barbara at 08:50