Last weekend, and the one before, I went to Harrogate with another of the volunteers who work on the Knitting & Crochet Guild collection.  We had with us a suitcase full of items from the collection to show them to two groups of  knitters who were on a Yorkshire knitting holiday organised by Susan Wolcott of Trips for Knitters.   Julia Marsh, who was with me at the first trunk show, has posted photos of all the items on her Hand Knitted Things blog, here.  So I don't need to do that, but instead I'm just going to write about a few of them in more detail.

We started with some 19th century knitted items.  First, a charming little pence jug (photographed with a scale, so maybe you can see that it is only a few inches high).


For such a small piece, it has a lot of different colours: two greens, two shades of teal, and three reds/pinks.   Presumably it was knitted to a published pattern - there are many patterns for pence jugs in 19th century knitting books and magazines.  But we haven't matched this one to a pattern yet, and if anyone recognises it, I'd love to know.

I took along the pence jug I knitted from an 1840s pattern, that I wrote about here, and also some Victorian pennies (so much larger than modern pennies). 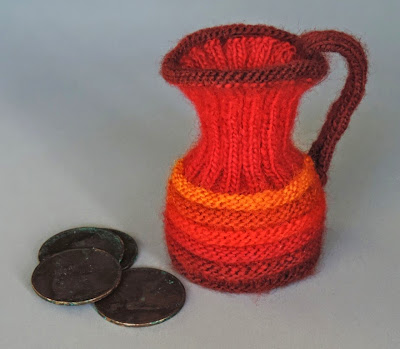 I could demonstrate on my little jug that it's perfectly possible to get even Victorian pennies through its neck, because it's ribbed and stretches.  I guess that's true of our original jug too,  but we don't want to try.

Next, I showed a lacy doiley that I think is also 19th century (though I haven't really any evidence for that.)  At the second Harrogate show, I had another doiley for comparison, in a very similar pattern, but knitted in a thicker cotton.


The thicker cotton makes the doiley a bit larger and of course a lot thicker, and I suppose that's more practical if you want it to protect a surface, but it does not show the lace pattern well.  Both doileys have a central roundel knitted working outwards from the middle.  The roundel is the same design in both doileys, but the edgings are different.  Each edging is knitted separately, as a strip to fit the circumference of the roundel, and then sewn on and the ends joined together.

I'm not a big fan of doileys, in general, but I like the lacier version of this one. Here's a larger photo. 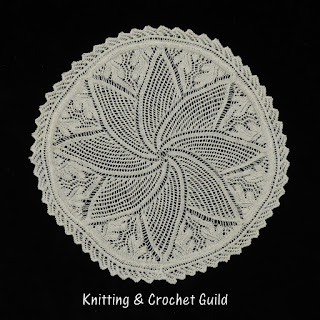 The central spiral star is a motif I have seen before in knitted doileys.  In this one, the triangular gaps between the points of the star are filled with my favourite Leaf and Trellis pattern (aka Print o' the Wave).

Again, if you know the pattern for these doileys, please let me know.

Moving on chronologically, we showed some Irish crochet and the First World War 'Welcome Home' tablecloth. And then we reached the 1920s, and what Richard Rutt  (in his History of Hand Knitting) called 'the jumper craze'.  Artificial silk, or 'art. silk', i.e. rayon, was very popular and we have several knitted and/or crocheted jumpers in rayon in the collection.  As well as being a favourite yarn at the time, it doesn't get moth-eaten and doesn't shrink, so has lasted very well.

At Harrogate, I showed a jumper in apricot rayon that is partly knitted and partly crocheted.

I think it dates from the early 1920s. It has the typical straight up and down lines of a 20s jumper - although there is a drawstring belt, it probably wasn't at waist level, and the waist would not have been emphasised.  One of the knitters in Harrogate loved this jumper so much that she would like to make one.  We have many patterns for rayon jumpers from the 1920s, in magazines like Fancy Needlework Illustrated, but I have not yet found this one - I'm on the look-out for it.