Writing last week about the design for a 'novel wool winder' in Hobbies Weekly reminded me of some war-time correspondence I had seen in The Times about why wool was sold in skeins and not ready-wound into balls.  I found it a while ago when I was trying to find out when wool started to be sold in balls.  The letters appeared in 1944, not long after the Hobbies Weekly design was published, and began when a man wrote, under the pen-name 'Skein-Holder', to complain that he was having to hold skeins of yarn for his wife while she wound them into balls, and what a dreadful waste of time it was.  Obviously, he was not a Hobbies Weekly reader, and so hadn't made a skein holder for his wife.  (The Hobbies Weekly 'wool winder' is in fact a skein holder, or swift.   It holds the skein of yarn and makes it easier for a person to wind it into a ball, but doesn't help with the winding - though there are now hand-operated gadgets that do, and can be properly called wool-winders.)

TO THE EDITOR OF THE TIMES

Sir,—The Government has recently called on our women to knit a vast quantity of wool into articles required for the forces.  My wife was sent with a lorry to fetch the 2,000lb. [slightly over 900 kg.] of wool from London allotted to the knitters of our county.  The skeins packed in bales were so bulky that the lorry would only hold 1,200lb.  I suspect that had the wool been wound into balls the whole 2,000lb. would have gone into the lorry.

The knitters have now to wind each skein into a ball before they can start to knit the wool.  Each skein takes one or more often two persons at least five minutes to wind.  I have just held a tangled skein which took my wife 15 minutes to wind.  The time which our unpaid knitters spend in winding must add up to thousands of hours.

By 1779 Hargreaves, Arkwright, and Crompton perfected the spinning jenny.  In 1787 Cartwright perfected the power loom.  Yet in the last century and a half the wool trade has failed to produce a mechanism whereby knitting wool can be wound and sold in a ball ready for the needles.  Ever since, as a small boy, I held skeins for my mother I have wondered why.  My excuse for now seeking an answer to this simple question through your columns is that every hour which every worker can save is a factor to hastening the end of this war.  For the reason given above. the answer to this question will interest thousands of your readers if you can elicit it from the wool trade.

I am, Sir, yours faithfully,

A few days later, there was a definitive answer from the Director of Lister's, spinners of knitting wools in Bradford:


Sir,—For many years wool has been wound by machine into balls ready for the needles. The reason for discontinuing this make-up during war-time is that the process is costly both in labour and in the materials and space needed for packing in boxes.

Yours truly, for Lister and Co. (Knitting Wools), Limited,

Mr Watson's letter showed that 'Skein-Holder' was wrong to think that machines to wind wool into balls did not exist and that 2,000 lb. of wool would have taken up less space if already wound - he claims that on the contrary, it would take up more space.  That should have ended the correspondence, but didn't.  The following day, the Yorkshire Post newspaper joined in:

Long-suffering husbands will surely be grateful to Times correspondents who have raised the question of winding knitting wool from skeins to a ball.  Someone wrote plaintively to say that he had just held a tangled skein which took his wife 15 minutes to wind, and added that the time which wartime knitters spend in winding must add up to thousands of hours.  "Ever since, as a small boy. I held skeins for my mother I have wondered why." he adds.

So, indeed. have I.  I recall one handy man who, determined to end the agony of skein-holding, made an adjustable wheel on which the skein was placed and pulled off as the knitter worked: to the best of my recollection the idea was a success.  Goodness only knows why some such gadget was not marketed long ago.

Why market wool in the skein, anyway?  Why not in the ball?  Many a man must have asked himself that.

The Yorkshire Post then quotes the whole of the letter from Mr Watson, and finishes with a stirring plea for wool to be sold ready-wound after the war:


So! It can be done. Husbands will grimly note this, and demand that all postwar knitting wool shall be in the ball. That destroyer of domestic serenity, the skein, must be banished from the firesides of Britain.

And a day later, another letter appeared in The Times, confirming that some wool was sold in balls before the war, and then claiming that in any case winding wool into a ball before starting to knit is completely unnecessary.  (Provided that you don't mind being tethered to a chair, or something like that, while you are knitting - carrying about a loose skein of yarn could lead to terrible tangles very quickly.)


Sir,—Your correspondent "Skein-holder" is quite wrong in supposing that no machine has been invented to wind wool.  Before the war at least a score of various brands of wool were sold ready wound----in the "cocoon" style, i.e., with the thread unravelling from the inside, not the outside, and this type of ball has the great advantage of not rolling about.

Admittedly, none of the wool officially issued for "service comforts." is in balls, but it is perfectly easy to knit direct from the skein, provided that it is not tangled to start with.  I did not believe this myself until it was demonstrated to me many years ago by a nun, who knitted dozens of garments annually for an orphanage run by her order.  Since then I have never spent a single moment in "winding." Yours faithfully,

The 'Cocoon' style was used in this country in the 1880s - though apparently only by one small spinning company at that time (see this post).  It's interesting that Ellis Swale could claim that by the 1930s it had become a common way of selling wool.

The final voice in the correspondence went to "A Mere Male":


Sir,—I am not so fortunate as "Skein-holder" in having time on my hands, but may I briefly reply to his letter of February 5.  I suspect from the facts given that the county to which he refers is one in which I also have a knitting interest.

Any member of the wool trade will tell him that (1) It is possible to wind wool into balls, and this is done in the case of special wool, such as Angora.  (2) It is not practicable in the case of wool in general demand, for the following reasons: —(a) An extra process is involved with consequent increase of price. (b) Balled wool is more bulky than skeined, as the balls must be loose. (c) Wool loses its resilience and other qualities expected of it.

As my competence to buy wool or even arrange its distribution has frequently been called into question by ladies of a certain country-wide organization, I sign myself

Rather a nasty letter. I think.  It was mean to suggest that 'Skein-Holder' has time on his hands (and by implication, wasn't doing as much as he should for the war-effort) just because he was helping his wife to wind her knitting wool.  And he had clearly annoyed the women of the 'country-wide organization' (the W.I.?), perhaps by throwing his weight about.

The Times correspondence ended with a final letter from Skein-Holder, who remained unconvinced by the arguments that winding wool into balls was better done by hand, and in any case unnecessary.   He suggested that if knitters preferred 'in ordinary times' to buy knitting wool in the skein, it might have been out of 'deeply rooted habit'.  It seems more likely to me that if there was a significant cost to the manufacturer in winding wool, then ready-wound wool might have been more expensive for the knitter, and that would have been an excellent reason for many knitters preferring to buy wool in the skein.

In fact, quite apart from the design in Hobbies Weekly, there should have been several skein holders on the market.  From about 1910 to the start of World War 2, several patents for skein holders were granted.  The illustration shows a complicated contraption in wire, patented in 1913.  It must have been put into production, because we have one in the Guild collection, as well as a few others of different designs. 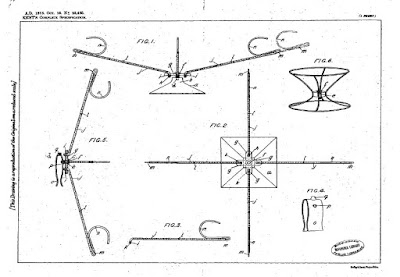 So Skein-Holder might equally well have asked why, if knitters had to wind wool from the skein into a ball before knitting, they did not invest in a (mechanical) skein holder, and instead press-ganged husbands (and handy children) into helping.
Posted by Barbara at 10:24