John saw this copy of Hobbies Weekly at a book fair, and bought it for me, because of the illustration of a wool winder on the front cover. 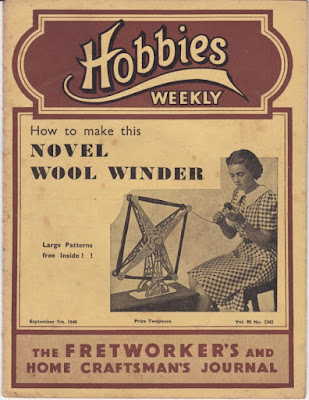 The magazine did not cover a wide range of hobbies, in spite of the name - it was mainly aimed a woodwork, and specifically fretwork.  This issue was published in September 1940, when almost all knitting wool was sold in skeins and had to be wound into balls at home, and the magazine explained the virtues of the wool winder:


"Every knitter—and this, of course, relates more to ladies—knows the trouble of getting somebody to hold the skein whilst it is turned off into a ball suitable for their own use. The more independent knitters who use the back of a chair for the same purpose also have cause to complain. Here is a piece of work which will make them entirely independent and able to handle as much wool as they like, easily, expeditiously and satisfactorily."

The magazine would supply a pack of wood (oak) for making the wool winder, by mail order.   The pattern, printed on paper, was glued onto the oak sheets and the pieces cut out with a fretsaw.  Then the paper was removed (somehow).  The copy I have no longer has the paper pattern, so perhaps it was used, successfully I hope - it sounds as though you could only make one wool winder, and that would more or less destroy the pattern.

The contraption was made to fold up, as shown in another illustration:

"The whole thing can be kept in quite a compact space because the arms will close when not in use. Moreover, the needles themselves are accommodated in simple racks on each side of the parts as can be seen in the picture. They are thus placed in a handy position whilst the next ball of wool is being wound."

That was surely not written by anyone who knew anything about knitting - if you were winding each ball of wool as you needed it, as it implies, then after the first ball of wool, your needles would already be in your knitting. And the racks wouldn't do for general storage of a knitter's needle collection - it looks as though they only hold a very few pairs, and that wouldn't be adequate for any knitter I know.

If the wool winder worked, it would be a useful gadget to have.  And I suppose I am being a bit mean in suspecting that the cut-outs in the arms are more designed to show off fretsaw skills than for any practical purpose - there probably was a practical reason, in lightening the weight of the arms so that they would turn more easily.  A potential snag with the design is that, as far as I can see from the instructions, the winder isn't adjustable for variations in skein size - but perhaps that wasn't necessary?  And (me being picky again) the base would have to be a lot heavier than it looks, to stop the whole thing toppling over.  But I should stop being negative, and believe the magazine when  it says:


"When complete and nicely finished with stain, polish or paint, the article is worth a great deal more than it costs to make, and will be most acceptable as a present to any ardent knitter. Or, of course, it is just the thing to complete for a Sale of Work, or for private sale to those who are or are likely to be busy knitting comforts for the Services."

In September 1940, the country had been at war for a year, and many knitters were busy making 'comforts'.  I wrote a post a few years ago about the things that were needed for the Army - you can find it here, and think of someone using the "Hobbies Weekly" wool winder while knitting a khaki cap-muffler.
Posted by Barbara at 09:57