I've been working with the pattern leaflets in the Knitting & Crochet Guild  collection for a long time now. A lot of them aren't at all memorable, but sometimes there's a batch that stands out.  One is a small number of "Fair Isle" patterns for Spider Wools, published, I guess, in the late 1940s,


Although the patterns are labelled "Fair Isle", they aren't anything like traditional Fair Isle designs.  Especially the one with the pandas:


Spider Wools were produced by the Bradford Hosiery Yarn Spinning Co. We have only a dozen or so Spider patterns, but evidently there were many more, judging by the leaflet numbers.  The Scottie dog and panda designs seem to have been popular - I have seen several copies of each of those leaflets, though for the rest we have only one copy (or more often none).

There's an earlier leaflet, no. 56, for Baby's Rompers, that possibly dates from the 1930s.  They are certainly very 30s names for the designs:  Chips, Bunty and Mick.


But most of the leaflets that we have were published at about the same time as the panda and Scottie designs.  There are a few other "Fair Isle" designs - all for girls, except the outfit below.


This one would be more attractive, I think, if I could figure out what the design represents.  There are bands of butterflies, and then bands of baskets? or cauldrons? or...?  They might, I have just realised, be bowls of flowers.  But there's no chart, so I would have to decipher the row by row instructions to see if they would look like bowls of flowers in the colours specified.   And I'm not going to. 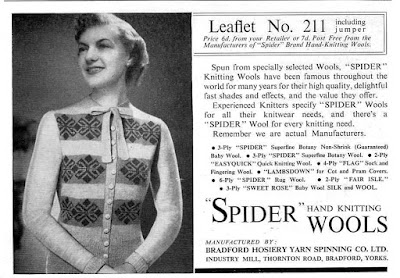 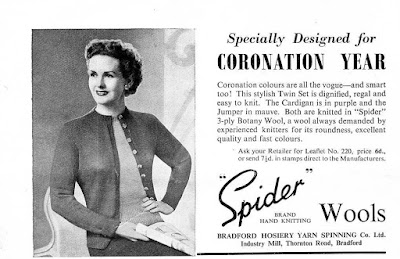 Leaflet 220 was a Coronation design - a purple cardigan and mauve jumper.   Like the other patterns, they are knitted in 3-ply wool.

After that there is a gap until the 1960s. I think that by then the company was part of Coats-Patons. We have a few Spider patterns for mohair from the mid-60s.  Very of their time. but a long, long way from the 3-ply "Fair Isle" designs of the late 40s.