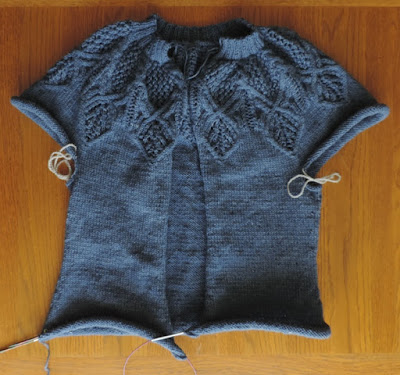 It's going to be a cardigan.  The design is by Norah Gaughan, from the Holiday 2016 issue of Vogue Knitting.  (The magazine appears in the U.K. as Designer Knitting, with a different cover, and the equivalent issue was Early Winter 2016.) 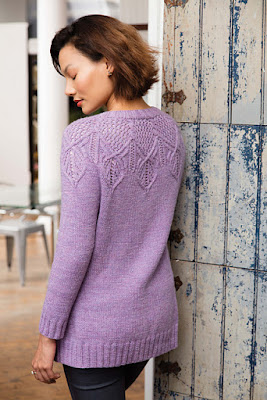 It is going to look exactly like this, only denim blue.

As you can see from my work-in-progress, it's knitted top-down, with no seams.  I have got past the complicated yoke, which took a lot of concentration because almost  every row is different - after the yoke it's very straightforward, and I have nearly finished the body.

The yarn is Aire Valley Aran, spun by West Yorkshire Spinners ("reared, sheared and spun in Britain").  The pattern calls for an Aran weight yarn, though I think the specified yarn must be relatively lightweight to give the specified gauge (21 stitches and 30 rows to 10 cm in stocking stitch on 4mm needles ).  But Aire Valley Aran is also quite lightweight for an Aran yarn, and my gauge is spot on.

I did have a crisis of confidence part way through, though.  One of the advantages of knitting top-down is that you can try on as you go, and I did that, once I had finished the yoke and reached the point where you divide the sleeves from the body.  At that point the yoke looked extremely bulky and much too large.   It doesn't naturally lie flat - especially the cables at the top.   So at that point I pressed it gently under a damp cloth, which was an improvement.  But it was still too large around the neck edge.  The ribbed neckband is supposed to be added as a finishing step, but I decided to pause knitting the body and add the neckband at that point, and that has improved the fit around the neck a lot.  I now believe that it's going to fit me when it's finished, which is a great relief.

Without the neckband, the neck edge was much looser, and was sitting much lower when I tried on my knitting - it would have been difficult to judge the finished length of the cardigan.  So I'd advise anyone else knitting this pattern to add the neckband early, not at the end.
Posted by Barbara at 16:40