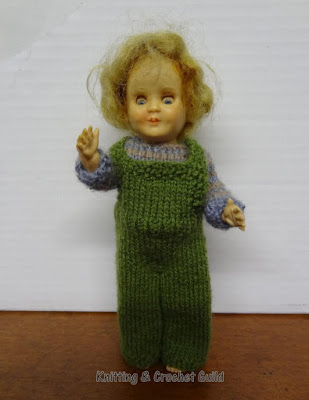 We have recently received a donation to the Knitting & Crochet Guild collection of a set of doll's clothes, and the doll they were made for.  She is not very pretty, to be honest, but at least she's very well-dressed.

I think that originally there might have been another doll, with dark hair, because she is one of the Rosebud twin dolls that featured in many issues of Woman's Weekly in the 1950s - the magazine published knitting patterns for outfits for the twins.  And many of the outfits that came with our doll are in pairs, in two different colourways - there is another pair of dungarees and a jumper to go under them, for instance.

The pattern for the dungarees and jumper outfit was published in March 1951, and the dolls are featured on the cover.


The illustrations to the patterns show the twins in various poses, intended I suppose to make them look a bit more life-like.  The magazine gave details of the dolls and how you could buy them by post.  They were 6½ inches high (16.5 cm.) and each doll cost 2s 6d - that's 12½p, directly translated.  And of course: "please state whether a blonde or brunette doll is required when sending your order."

Here are some more of our doll's outfits - a very pretty blouse and skirt, a vest and knickers, and a siren suit. 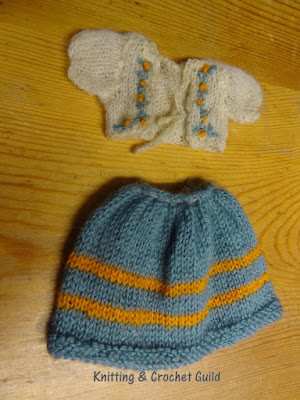 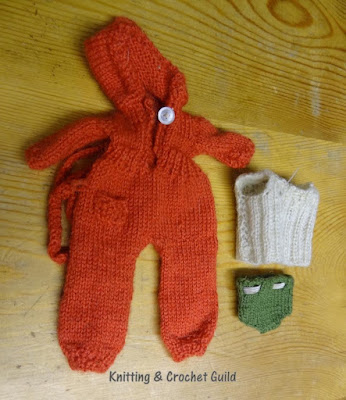 I am sure that they were knitted from Woman's Weekly patterns too, but we don't have a complete set of the 1950s issues.  (Probably just as well, as we would need to store more than 500 issues.) We do have several more patterns for the twins' outfits, including a very comprehensive outfit from 1957: underwear, dress, socks, shoes, mittens, hat and coat. 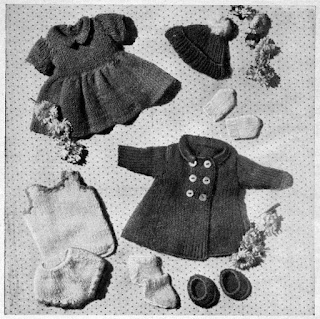 My grandma read Woman's Weekly every week and knitted clothes for my doll from it, and I thought that she used the patterns for the Rosebud twins.  But I think I was wrong - Dolly was bigger.  And more lovable, too - apart from being not very pretty, a 6½ inch doll is too small to be cuddly.  Woman's Weekly had patterns for other sizes of doll occasionally, so perhaps one day I will see one that I recognise.  (Sadly, Dolly and her clothes have not survived - she succumbed to a nasty plastic disease long ago.)